THE WOUNDED HEART OF GOD 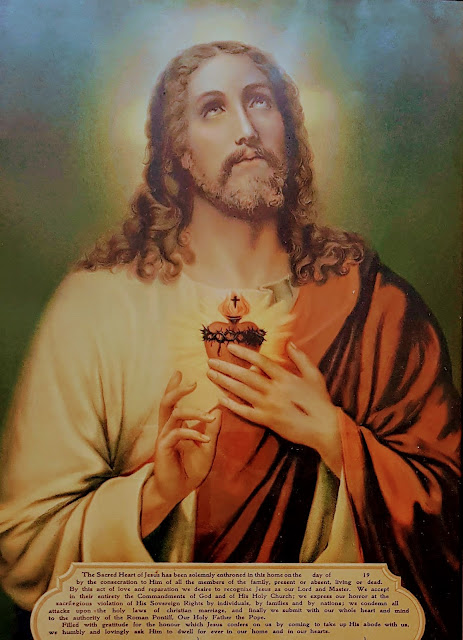 She puts her two hands on her hips and rolls her eyes to heaven. In that moment I feel like the most stupid, embarrassing man in the world and, in my awkwardness, I say something else stupid so that she rolls her eyes again. We used to have such a happy relationship. As a little girl she would jump for joy at my arrival but now there is a distance growing between us. People tell me it’s what happens with teenagers, that she will come back to me but in the meantime, there is the pain of a wound in my heart and there’s absolutely nothing I can do about it.


I did it myself in a different sort of way. As a teenager I justifiably felt that life at home was unfair, impossibly unhappy and, with my youngest sister, I used to plan my escape. It was a fantasy in which I would get out the bedroom window and she would let me down by a bedsheet. From there I would hide away in one of the ships down the docks and end up in some faraway country.


Of course, I never ran away but I did escape by shutting myself down, cutting myself off emotionally and some years later when I had already moved away from home, my mother wrote me, lamenting the distance between us. Not the distance of miles but the distance of our hearts. I realized that I was not the only wounded one and that my emotional distance had inflicted a wound in her and so I began the journey back to her, a journey that took a whole lifetime. Returning can take a lot longer than the going away.


These memories come back to me as I reflect on the Gospel of the Prodigal Son. Walking by the sea I found myself wondering what was it that the Father felt when his youngest son left home, cutting himself off totally from his father; what did the Father feel when he encountered the distance between him and the older son who had remained at home physically but emotionally had left.


The Father is God, a God with a heart, a God who feels very deeply. This is one of the reasons why Jesus came to earth in flesh and blood – to reveal to us in human terms who God is, what God is like and how God feels. The two teenage memories I’ve spoken of indicate something of what God feels when we create a distance between Him and us, they are parables of what sin does in our lives. Sin offends God, touches Him like a wound and it keeps us at a distance.


And there are much deeper wounds – one spouse discovering the other’s infidelity, the betrayal of friendship, experiences of rejection. The awful wounds inflicted on women, children and sometimes men through human trafficking, modern forms of slavery, the hidden crimes committed, sometimes” legally”, against the voiceless and most vulnerable; wounds inflicted beneath a veneer of sophistication by institutions of power. There are many varieties of wounds that offend and wound the heart of God, that create varying degrees of distance between God and those inflicting the wounds.


Something of what God feels is revealed in the Passion of Jesus from the Agony in the Garden of Gethsemane, to being innocently condemned, flogged, spat upon, mocked, deserted, stripped naked, crucified. The wounded friendship when He asks, “Judas, would you betray me with a kiss?”


What God does with His wounded Heart is to await the return of each one living at a distance from Him, to wait and go out seeking, pleading. For us it is necessary to face up to the fact that we are, might be living at a distance from God through the sins that we have committed. It is for us to come to our senses and take responsibility for what we have done and are doing; to turn back and make the journey home to our Father, however short or long the distance. However, one of the hardest things for us to admit is that we have done wrong, strayed from the path marked out for us by God, that we have taken on ideas, attitudes and ways of thinking that are at odds with God, that sometimes are an affront to God. We find it hard to admit that we are sinners in need of mercy, hard for us to say sorry.


We might content ourselves that our sins are small but even small sins constantly repeated can lead us slowly further and further away from God. Telling simple lies is one example. One lie may be small but the habit of small lies turns us into liars.


So, we often remain stuck in our distance and thereby miss the wonderful joy of the Father’s embrace and the tenderness of His kiss, the kiss that brings solace to the hurts we endure, the consolation of mercy that kisses our sinfulness. We are deaf to the voice that calls us home – home to ourselves and home to God – to that state of being in which we are most truly ourselves. And, no matter what we have done, however small or great the sin, what matters to God is that we come back. That’s all the Father wants.


As a sinner I love the Gospel of the Prodigal Son because it reminds me of how “safe and sound” I am with Jesus; as a sinner I am blessed to have it said to me in confession, “your sins are forgiven, go in peace!” and, as a priest it is a privilege to assure another with those same words. There is something about saying it and having it said. We often think that it’s enough to tell God I’m sorry but in Jesus’ ministry of forgiveness He always says the words our loud. And in Psalm 32 we have the expression of a human and divine truth – “I kept it secret and my frame was wasted, but now I have acknowledged my sin and you Lord have forgiven.”