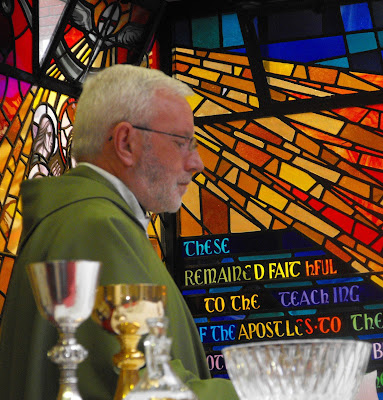 I'm not much into country music but the first time I saw Charlie Lansborough on tv he made me cry with his song  “My Forever Friend”, which is about the friendship of Jesus. My tears were not of sadness but of recognition. I felt the inner conviction that Jesus is my forever friend. This conviction is better expressed for me in the song by Delirious? - “What A Friend I’ve Found”.  My life, my vocation is based on my friendship with Jesus.

When God says to the Prophets “Before I formed you in the womb I knew you; before you came to birth I consecrated you. I have called you by your name. You are mine.” I know what this means. I feel it! Because of it I know that I have been destined for priesthood from my mother’s womb and even before that.

I’ve always had an instinct for God, an attraction for Him and I’ve always wanted to be a priest at the altar for as long as I can remember. During the Easter holidays of my final year in secondary school there was a vocations workshop on in the Redemptorists College down the road from home. I had planned to go but when the time came I didn’t feel like missing out on the holidays. My mother said “maybe you should go all the same”.

So I went out of respect for her and I met Fr. Vincent Kelly the Pallottine Vocations director who made a deep and joyful impression on me and he invited me to visit the community in Thurles. I fell in love immediately with the place, the community and I knew that I had found my home. Vocation is about finding one’s home, our place and state of belonging in this world.

I was on a high after my visit to Thurles and determined that it was there I would live. My parents were a bit frightened because no one had ever of the Pallottines and Mam was sure they might be a sect or at least a "strange crowd". She told one of the neighbours of her concern about the Pallottines. The woman told her she need not worry because two of her own neighbours  were Pallottines and that they were a lovely community. I have heard others talk about the austerity and coldness of seminary life but for me there was nothing austere in the Pallottines and there was great warmth. That’s how my vocation began and it was a very innocent, uncomplicated beginning.

Over the next 46 years I was to learn how God shapes us and forms us through struggle, suffering and sin. As the Book of Sirach says “If you aspire to serve the Lord, prepare yourself for an ordeal” (Sirach 2) - not a great way of trying to attract people to a way of life. But it is true that we cannot become anything worthwhile in life without challenge, without the cross. A vocation is like climbing a mountain, doing the Camino to Santiago - demanding, difficult, involving risk and it is thrilling.

What has held me together in all of it is the Eucharist and the Word of God; I have learned the meaning and power of obedience from Mary at the Annunciation; I have found meaning in ministering to other people, finding Christ in them time and time again. Family, community and friends are also essential in helping us stay on the road that God has marked out for us.

I have been chosen and, as the song says, "I have decided to follow Jesus - no turning back".

I ACHED FOR HER TOUCH

Touch me and see for yourselves; a ghost has no flesh and bones as you can see I have.’ And as he said this he showed them his hands and feet. Their joy was so great that they still could not believe it, and they stood there dumbfounded; so, he said to them, ‘Have you anything here to eat?’ And they offered him a piece of grilled fish, which he took and ate before their eyes. (Luke 23) 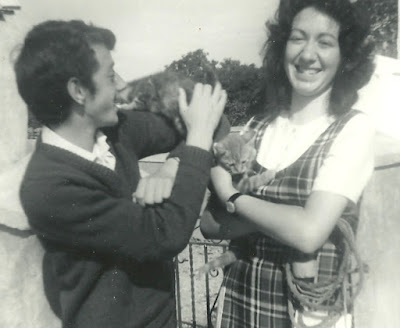 When Maura died I ached for two things - the sound of her voice and her physical touch. We were always physically present to each other - when I returned home from Tanzania, having been away for two years, her hug was fierce and long; we sat shoulder to shoulder on the couch; she linked my arm when we walked. The ache for her touch was my prayer.

One night I dreamed there was a knock on the front door at home. I ran to open it and there stood Maura. She had come for a visit from her place in the great beyond. I hugged her tight and said with delight "I can actually feel you" and brought her to the kitchen where I asked her if she was able to eat. She said yes and I gave her a mug of tea and a piece of cake and we chatted.

When I woke from the dream, my ache for her touch was satisfied but what struck me most strongly is that we ate and drank together - she ate and drank. And this reminded me of the passage from Luke 23 which is today's gospel - where Jesus is trying to convince disciples that he is not a ghost but is physically alive. To prove the point, he asks for food.

It suggests to me that the mother who has lost her baby will hold her baby again, the father his son, the husband his wife, the friend the friend. We will touch each other perfectly, will relate to each other with perfect and delightful love. The limitations of physical boundaries will no longer hold us back; the limitations of our frustrations with each other will be gone. Our wounds will be healed - present but transformed.

The prophecies of the heavenly banquet will be fulfilled. And we will enter into the eternal, infinite exploration of the mystery of who God is and who we are in Him.

SHOULD HAVE TAKEN THE TRAIN 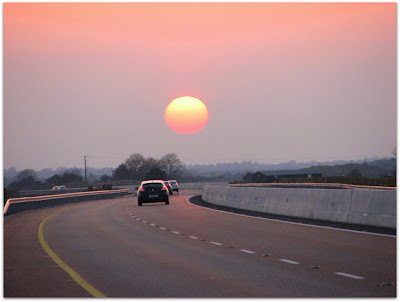 Should have gone to Specsavers. Should go! And yesterday on the M6 I thought, "I should have taken the train!"

It was my plan to do exactly that - come home by train for the sheer pleasure, the pleasure of seeing Ballyloughan and Loughatalia as we neared Galway's Ceannt station, reminders of youthful homecomings and the excitement of it. More importantly in the present to be without a car so that I would really rest and not be running all over the place.

But in his kindness the Provincial offered me the use of a car. And I took it because it made it easy for me to visit a friend who is I'll in Dublin. That was the right thing to do.

Twingo is 10 years old and lively. She gives me the feeling of being a boy racer, another fantasy of youth! I've driven her before and she's not due a service for another 8,000 km. But by the time I reached the Athlone bypass seven lights had come on in the dash. Was I imagining that the steering was heavy? The indicator stopped working as did the speedometer and then somewhere near Cappataggle she slowed and died. Luckily I got her onto the hard shoulder.

Har phoned a couple of mechanics, one of whom suggested I contact the insurance. Jane was very helpful and promised a tow truck in 60 to 90 minutes.

I got out of the car for the sake of safety. It's astonishing how the power of passing traffic makes her shudder. Hard shoulder accidents came to mind and, though it was cold outside, it felt safer. I prayed the rosary.

The truck arrived in about half an hour. He checked the engine and told me the alternator was gone. He would take her to a garage in Loughrea and dropped me off at the Supermac Plaza where Har was waiting.

Instead of going home to Mervue we went back to his place where Elaine had a lovely and generous dinner ready. Katie and Laura showered me with their delighted love, showing me their paintings, telling their news and playing their music. "It feels like three years since you were here" Katie said. And they have grown so much!

Har brought me home and lit the fire. Evelyn arrived and the three of us Sat together drinking tea and chatting in the place where we were brought up. Rose phoned and the circle was completed.

There's a reason for everything and maybe the reason for this is that I stay put, take it easy, be really still, be at home!
at April 12, 2018 2 comments: