THE PACE OF MY WEAKNESS

There is a prophet among them, a prophet unheard and despised. (Ezekiel 2:5 and Mark 6:1-6) 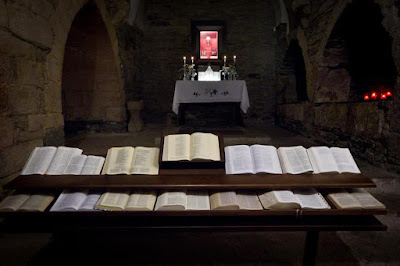 If I remember rightly it was during the Synod on Religious Life in 1994 that Cardinal Ratzinger (Pope Benedict XVI) said that Religious Life is the prophetic arm of the Church and he described the prophet as one who sees the face of God.

We usually think of prophecy in terms of the spoken Word but it is first of all spiritual vision, vision of God in the way that Moses beheld the Holy Face of God on Mount Sinai where God spoke to him as one does to a friend. When Moses came down from that encounter the people first noticed how he radiated the presence of God before ever he said a word to them.

Prophecy is about recognizing the presence of God in the ordinary and extraordinary realities of life, in all its struggle, suffering, it's joys and hopes. It is about speaking Gods Word to those realities and being a prophetic presence.

Paul received a prophetic word in his struggle with some weakness, a "thorn in the flesh". Instead of God taking awaythe problem He said "my grace is suffient, my power is at its best in weakness" (2 Corinthians 12). Paul accepted the Word and went on to say "I shall make my weaknesses my special boast...for when I am weak then I am strong."

This is where many of us might reject the prophetic Word and in this world such an idea is ridiculous because none of us wants to be weak and everything in the world suggests that we ought to be strong.

Can I welcome weakness as a grace and an opportunity to experience the power of Christ in me?

On the Camino to Santiago I experienced prophetic presence, word and action many times and one day in particular comes to mind.

It was the 26th day of walking and my enthusiasm, my pride had already been humbled by the intense pain in my right foot which kept suggesting that I would not be able to keep going.

Five of us were on the 30km walk to Ocebriero, the last 10km being a steady ascent. My companions were young - in their 20's, early 30's - and they might well have strode ahead in their strength but, instead, they stayed with me, walked at my slow pace, encouraged and supported me all the way.

This was prophetic presence in action, in this God was telling me that He takes the pace of my weakness and pain. He remains with us, moves forward with us at our speed.

This is generally not an issue for the young but it does matter as we grow older and our limbs no longer move as quickly as they did, when we easily run out of breath.

It matters that God also travels at our speed when we become emotionally, spiritually and mentally incapacitated. "I am with you" is His enduring promise.

The other significant prophetic moment came when Brend looked at me with real concern and said, "Eamonn if you're not able to walk we'll carry you!" It would have been an impossible feat up that ascent but he absolutely meant it. They would have carried me somehow. I was urged on by this love, the love of Christ in him, in them. And there's a song by Michael W Smith that I hum when I think of that moment. I Will Carry You. God carries us.

Amen! Let it always be! 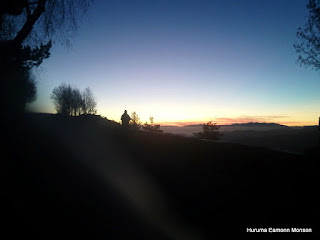