THE HILL OF MERCY: Camino Remembered

In the morning we had to be out of the hostel by 7am. Alfred moved on alone, hoping to walk tracks that were not part of the set route. We were already that close from one day together that I felt lonely parting and I expected that we would not meet again.

Not wanting to walk in the dark I stopped under a street light on the bridge to pray to the sound of cockcrow, the running waters of a river and the wind. Later in the morning I went into a field to say Mass under a tree because it seemed there was no guarantee of finding an open church.

I walked alone the 18 miles from Larrasoana to Zariquiegui via Pamplona and ended up being the only pilgrim in a private hostel in the tiny village. While walking through the beautiful city of Pamplona I became aware of how at ease I am in an urban setting. I love the sea, the country and solitude but at the end of the day I am urban! During the Camino I came to a heightened awareness of the sacredness of the city - the humanity of it, the presence of God in it.

While praying in the Cathedral in Pamplona I read John's Gospel chapter 2 - the Wedding At Cana and the Cleansing of the Temple. What Jesus offers now - the new wine - is better than what went before and in the cleansing of the temple he is also offering us something better than we have known. The question is will we, will I, allow Jesus to give what he is offering? Am I willing to go through the kind of cleansing that is necessary in order to experience the new?

I left Zariquiegui on Friday November 4th at 8.00 a.m. The rain was pouring down, the ascent of the alto de Perdon muddy and slippery, the fog thick and the air filled with the eerie sound of a hundred barely visible wind turbines.

Being Friday I decided to pray the Stations of the Cross internally, arriving at the top of the hill for the crucifixion. The monument is familiar from the movie ‘The Way’. On my way down the other side at the placing of Christ in the tomb my mind was instantly back at Calvary in Jerusalem 1999 a month after my sister Maura’s death. At that time I placed her in the tomb and cried and cried a torrent. Now in this place I not only placed Maura but Mam & Dad and my own past with its failure, its pain.

And the tears flowed again! And though I was totally alone, miles away from anywhere, I tried to hide my tears at first because they embarrassed me. But I dropped my hands and my guard and let go, crying all the way down.

It was one of the most significant moments of my Camino and I walked 24 miles that day to reach Estella, a day ahead of schedule, arriving in the hostel where Mark, Becky and Brend were staying, though I wasn't to get to know them yet. Mark and I met briefly on the stairs, introduced ourselves and he with his great smile said, "I look forward to getting to know you." Right then I wasn't fit to get to know anyone!

It seems to me that Divine Province intended me to meet these very people who became major blessings in my whole experience.

Estella was also the friendliest town so far. It had a working class, happy atmosphere, and I went out in the evening to have the loveliest burger and chips ever. And I got lost and was rescued by a lovely couple - Miguel & Conti - who walked me a long way back to the hostel, none of us having a language in common! 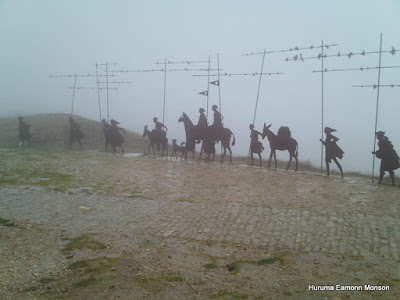