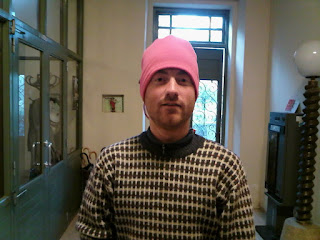 I woke at 6.00 a.m. on the Feast of All Saints to the sound of thunder. A look out the window revealed torrential rain. At 7.50 a.m. I walked out into the gloom of the morning, uncertain and with the intention of going to the church to pray for guidance but it was locked and soon I found myself walking the road to Valcarlos where I arrived two hours later soaked to the skin.

From there the rain eased off and most of the day took me through miles of beautiful forest, mountains and rivers. And utter solitude! Innocence allows me to stand looking up at the mountains rising high above me, realizing that I am so small. And at the same time I am aware that I stand higher than the tops of the trees and torrents below me “From the dust He lifts up the lowly, from the dungheap he raises the poor” (Psalm 113) God is great!

It took about eight hours and 15 miles to get to Roncesvalles, the monastery hostel where I first met Aelfred. We share the same small cubicle, along with two others. He’s 27 years old, Brighton born but grew up in Scotland which he claims as his native place. He was to become my first companion on the Camino.

We had just been to Mass in the monastery chapel where I participated as a member of the congregation with the other pilgrims. Before holy communion one of the celebrating priests announced that communion is only for Catholics but that others could come for a blessing. My immediate reaction was to ask myself what it must be like for a non-Catholic to be told this.

I got my answer from Aelfred back in our cubicle where he was pacing. When I asked “how are you?” he blurted out his hurt and anger at the exclusion he had just experienced which he saw as an exercise of power on the part of the Church. I listened, let him rant. He apologized for loading this on me and kept talking. I said it was ok. He needed to say it.

Next day I headed off at about 7.30. in very pleasant weather. In the late morning I stopped for coffee at a bar in a little village. Smiling I asked the woman behind the counter for a cafe Americano. Her face remained impassive as stone while she got me my coffee and when I smiled and said “grazias” she did not smile.

I sat outside and was soon joined by Alfred who was protesting against the set route of the Camino that we had to follow, protesting against being seen as a tourist. And he insisted that the woman behind the bar had such a face on her because she’s fed up with pilgrim tourists. It doesn’t matter to me whether we’re seen as tourists or not and the set external route liberates me to pay attention to the internal pilgrimage so I don’t have to worry much about finding my way. “The lot marked out for me is my delight...you will show me the path of life” (Psalm 16). But Aelfred’s rebellion against the route led him to places and experiences beneath the stars that remained unknown to me.

It began to rain so we covered up and moved on, spending the rest of the day together talking nonstop. We got to the small village of Larrasoana at about 5.00 p.m. Alfred was for going on a further 10km but I had enough and he decided to stay as well. The municipal albergue was small, smelly and unattended, with just one other pilgrim. There was something homely about the three of us being there together in the simplicity. When we lay down to sleep in our bunks Aelfred turned out the light and said to me “thank you for today.” Thank you too I said as I closed my eyes and listened in my headphones to the song I want to die to - What A Friend I've Found by Delirious?