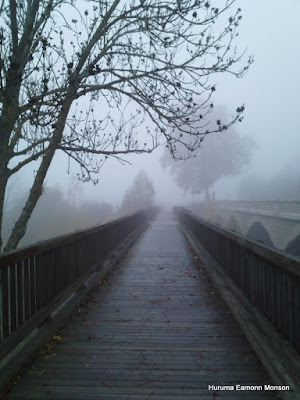 “...life must pass through difficulty in order to achieve any modicum of beauty”
(Colum McCann - Let The Great World Spin)

There were eight of us on the train up the mountains from Bayonne. One woman was obviously a pilgrim, being dressed much like me and carrying a backpack. The train stopped and after a delay the conductor came down to announce something that made the woman pilgrim puff and roll her eyes. Were we stuck? Everyone went up to the door of the driver’s cab and through his window we could see a flare burning bright at the entrance to a tunnel. There was the fear that rocks had fallen in the tunnel and the driver walked into the tunnel to check it out.

While he was gone everyone talked - happily. The eyes of a woman met mine so I asked if she spoke English. She did. And very well. Marlies and her daughter Monik are from Belgium. Marlies lives in St. Jean. Monik is visiting.

The driver returned, the journey resumed and when we got to St. Jean the two Belgians decided to walk with me to my hostel - Auberge du Pelerin - to make sure I got in. It was now 11.15 p.m. My knocks on the door and ringing of the bell brought no response from within. Marlies gave me her phone for me to call the woman of the house who came down and welcomed me into the dark silence.

I was talking like it was midday. She told me to be quiet because “people are asleep”. Hostels have lights out at 10.00 p.m. Opening the door into the dormitory she pointed to the top bunk inside the door. “This is yours” she said and then withdrew, leaving me to the darkness and the sounds of men sleeping. It was not the time to go rooting in my bag for anything so I threw it onto the bunk, climbed up and went to bed fully clothed. There was a blanket.

The morning revealed a small dormitory with just three bunks and two elderly men going about their ablutions. The guy beneath me was still sleeping. He was younger than the rest of us.

At breakfast the woman of the house, Daniela, was chatting with a young female pilgrim who had a rosary wrapped around her wrist. They both gave me a warm welcome. The two older men from my dorm were at the end of their Camino - a Frenchman who sadly had to abandon his walk because of severe back pain and a German who does not believe in talking to God because he does not believe in God. He was planning to get the train to Lourdes that day. I said “maybe God is talking to you” and told him how peaceful the Grotto is, especially at night.

The third roommate arrived and sat quietly at a distance. He is Julien, a computer scientist from Paris and he’s here to help Daniela clean up and close up. A nice man. I’m the last pilgrim of the season.

St. Jean is a beautiful place and it’s a beautiful day. There was some discussion at breakfast as to whether I should begin today or not because there is concern about the weather. But having been up all night travelling I decide to rest before beginning. Daniela agrees and says it will be alright.

When I asked Daniela where she comes from she replied, "I'm a citizen of the world. I allow no country to claim me." During the winter months she goes off backpacking somewhere around the world. She plans to do archery in India!