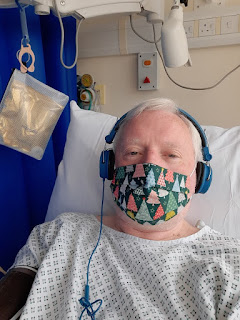 ‘Unbreak My Heart’ was one of the songs playing on Radio Sussex as I lay flat and still for the best part of two hours - well maybe 90 minutes - as the cardiologist first probed my heart and then proceeded to mend it. My only fear was that he would probe and find nothing wrong as happened twelve years ago in Dublin. He said as much before beginning the procedure – that the blockage he saw in my scan was nothing serious and would probably not require any treatment. And it’s not that I wanted to be unwell; I just wanted a reason to explain why I was feeling so unwell. To find a reason and have it dealt with.

My breathlessness has been developing for the past couple of years and came to a dramatic head in the Sahara Desert last year where I was left gasping and panting at a ferocious rate. By last week it was quite stressful. It demanded attention and the NHS gave me a date for the angiogram which took place in Eastbourne last Friday May 28th.

Family asked if I was nervous ahead of it but I wasn’t because I’d been through the angiogram part of it before and even if a stent was needed, I was told it was a minor routine procedure. That’s what I told the parish the previous Sunday.

I celebrated Mass first thing Friday. The memorial of the English Martyr Margaret Pole. Martyrdom calls for a total act of surrender to God in trust and, while I was not about to be martyred, I could make such an act of total surrender and trust in God. The line from the Responsorial Psalm provided the perfect prayer – into your hands O Lord I commend my spirit. That I did. That was my prayer setting out.

I took the train to Eastbourne and a taxi to the hospital, arriving there more than an hour early. In the cardiology ward I was kindly welcomed and placed under the care to two lovely nurses – a man from the Philippines named Jordan and a woman from Ghana named Abigail. They weren’t just lovely; they were exceptionally kind and professional throughout the whole day that I spent with them.

Finding a vein for the cannula proved a challenge and as they poked and probed so kindly, I thought of my mother who had the same problem. One time Dad and I brought her to A&E for some check-up. She was taken away from us into a room. A short while later we saw a patient being wheeled rapidly on a bed from the room where Mam was into another. Dad said to me, “Oh that looks like a serious case!” Neither of us realizing that it was Mam who was being rushed to coronary care because she had fainted under the probing of the needles that sought out her vein.

A doctor appeared with a consent form for me to sign and he went through the risks involved in the procedure. They are slight risks he said before rattling them off matter-of-factly: bleeding, heart attack, stroke and death. The last one both startled and made me laugh. I signed.

My cardiologist Dr. Walker, whom I was meeting for the first time, had treated Father Seamus Stapleton, my predecessor. “Did you trust him?” was a question a few people asked me afterwards. Did I trust the doctor? There wasn’t even the shadow of mistrust in me towards him or any of the team who worked with him.

The atmosphere in the theatre was very friendly, relaxed and happy. When they discovered that I’m a priest you could sense the interest in the air and even a rising in the level of their respect.

So, there I am on the flat of my back with my head turned to the left in a state of almost complete stillness. I wasn’t even troubled by the exposure of my body, the body that I am desperately shy of. And while I would have preferred the procedure to be done through my arm, I didn’t mind the discomfort of it being done through my groin. It’s a fascinating experience.

Sometimes Dr. Walker told me what he was doing, other times he was speaking to the team. There were moments of silence and puzzlement. After the first entry into my heart he said, “now I see the reason for your discomfort!” My arteries were significantly narrowed, so it was necessary to send in a balloon to stretch them open. When that didn’t work, he asked for a stronger one and then step by step he landed five stents into the arteries. I am in awe of his skill and his calm.

My prayer throughout was a silent “Totus Tuus” (totally yours) to God and towards the end I said the sorrowful mysteries of the rosary which was harder to concentrate on. But it was calming. The prayer kept me still and at peace. Even when my heartbeat dropped suddenly to 48 and there was a slight flurry within the team, I felt no fear. Only a peaceful sensation like sinking into a bath of water. They injected something into the cannula to bring the beat back up. And back it came quite quickly. “When this is all done” he said “you’ll be like the bionic man!”

And so, the procedure ended and I was brought back into the recovery room to lay flat for another hour and then remain in bed until 6pm. The rehab nurse came to talk me through what comes next, though a lot of it went over my head. I was surprised that she said I would need two weeks off because the procedure had been unusually long and for the first week I shouldn’t drive or lift anything. Shortly after 6pm Mary arrived to drive me swiftly and safely home.

My original expectation was that I would return to my normal weekend schedule but Father Tony had already dismissed that idea and came down to cover for me for a few days. Derry will come for the second week so that leaves me free not to have to worry about what needs to be done.

The extent of the procedure has somewhat shocked family and friends and I pray for them in their fright. For me it has been a joyful experience of grace and maybe I’m slightly proud of my five stents, like they are a badge of honour!

As always there have been many messages coming in – prayer, support and love – and I wonder who am I that I should be so greatly cared for.

The final word goes to God in the prophecy of Ezekiel 36:26, “I will give you a new heart and put a new spirit in you.” Perhaps through the injured heart of the body to the perfect heart of the soul.