A Tree, A Wedding and A Wound 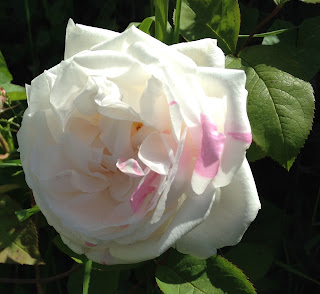 There was a tree in the garden in Thurles. An ordinary tree it seemed to us in the winter but in Springtime it revealed itself, giving forth two different coloured blossoms - pink and yellow. We learned that the tree with the pink blossoms had been grafted onto the main tree with the yellow blossoms, the two becoming one. One trunk, two identities. It reminds me of a couple getting married.

Such a couple came to the church today. A wedding in the time of covid-19 with fifteen guests, my first since before lockdown last year. And what a joy it was to feel and behold the love of this young couple. There was a moment in the ceremony when both were kneeling, leaning shoulder to shoulder, holding each other's hands, eyes closed in intent prayer and you could sense their lives merging in a new way, in the way of the sacrament. As time goes on they, like the tree, will become more and more one while each retains something of their own distinct identity.

Something similar is the desire of Jesus for His relationship with His followers. As the branch needs to be attached to the vine, so we need to be attached to Him, to have an enduring connection with Him. In a most unique way the Eucharist provides us with that connection. We can be connected to Jesus spiritually in various ways but only the Eucharist gives us a connection that is physical as well as spiritual. That's why the Mass is so central to our lives.

I found myself at the centre of a crime scene today. Coming towards the end of my walk I chose to go home via George's Street - the Quay Street of Hastings. A street that feels like home. It's there that you find the last of the Bank Holiday revellers,  boisterous and loud from a day's drinking.

An unruly wind blows, like the prelude to a storm, tossing a solitary white dove about in the sky. The wind has caused the pier to close before its time. Barriers taken down, chairs put safely away, most of the people gone home and it's not yet six o clock. A family unsuitably dressed for the cold, huddle together licking ice cream and for once the seagulls pay no heed. They are high in the sky swooping, diving, hovering.
There's a disturbance on the seafront, a menace in the street. Youths running back and forth shouting.  I have at times on the seafront in the past got this strange feeling, that "Something Wicked This Way Comes" - from the book by Ray Bradury. I feel it now.
I walk through the running, shouting youths and see a small group of people gathered around a man on the ground. Others standing watching. I know the man and go to him, kneeling, holding him lightly.  I am holding the Body of Christ. A young woman to my left is giving instructions, a young man to my right is pressing a cloth to the wound on his back. I ask if they have called the ambulance.  The shopkeeper is doing it now. Another young woman is calling the police.
Michael tells me he's been stabbed and asks me to see how big the wound is, if it's bleeding much, if he's going to die. Someone else tells him the wound is about an inch long and not too deep. It's bleeding but not a lot.  I have never seen a stab wound before and it too reminds me of Christ, the wound in His side that you often see in paintings.
"Eamonn, will you help me? Will you help me get a flat?" I will. I will. The woman to my left is rubbing his head. It's a kind gesture but not what he needs. He doesn't like it and tells her to leave him alone, not mincing his words. She leaves.
Two police cars and paramedics arrive. I step back into a doorway of the sweet shop, out of the way, in sight of Michael. The teams are very efficient, respectful, comforting. Two plain clothes detectives are on the scene, a woman and a man. Doing what you see them doing on tv. Directing proceedings. The area is cordoned off and they instruct the uniformed police to  start taking statements from various people. Not me for some reason. A number of people have taken video recordings of what happened. Someone knows the guys who did it.
A policeman is kneeling where I was. Michael asks if those who did this will go to prison. Nothing can be promised. What he needs is to be reassured that they will not come after him again. He's afraid of that. Afraid and shivering in the cold. A very vulnerable man, with no one of his own, no place of his own.
In less than an hour they have him on a stretcher, in the ambulance. "Eamonn, will you come to see me in hospital?" he asks. "I will" I say. A helicopter is in the air. It will take him to Brighton.
As I move to go home the male detective calls after me and if I heard him right he speaks my name, "Eamonn, has someone taken your statement?" In the middle of all the mayhem he has heard Michael call me by my name. That's sharp. "No" I reply. He tells a young officer to take my details. Tells me not to walk on the blood. I go home, go home knowing that I have been drawn deeper into this man's life in a way that I don't want because it is too uncomfortable, demanding more than I want to give.
Tuesday
Early in the morning Michael is on the phone telling me he's coming out of hospital and wants me to go and get him. I won't. I can't right now. And can't believe that they would let him out of hospital onto the streets in his condition. They won't, the nurse assures me. I get onto a man in social services who deals with housing for the homeless. A kind parishioner put me in touch with him last year when we were trying to sort something out. God puts people our way to get things done when our backs are to the wall.
At the end of the day Michael is in his new flat, looking remarkably well following his ordeal but you can see how tired he is, needing rest but sometimes resting is the hardest thing. We set him up with a few essentials to keep him going but he also needs our prayers because he is very, very fragile 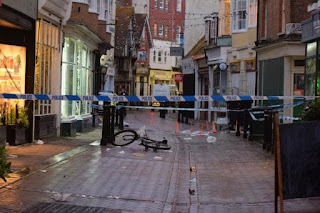