FEBRUARY SONG: Seasons In The Sun 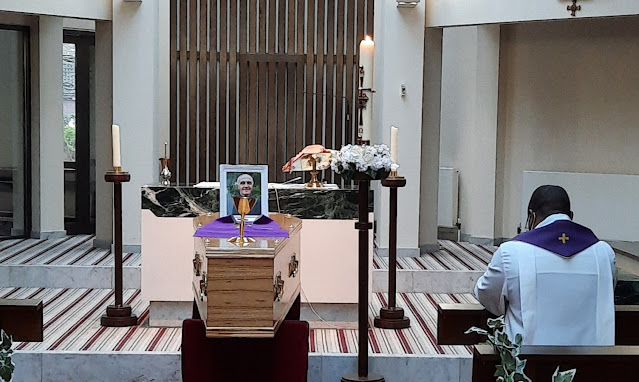 My tears are dry. Dry like sand. Lost sand of the Sahara scratching the place between bone and marrow, a constant irritation, clogging up my eyes. It's hard to cry when you're coping, managing what needs to be done. "Big boys don't" but that's not true anymore.

It comes out in dreams. The other night I was put into a psychiatric hospital, tried to escape, was captured, and locked in a room. I heard the key being turned on the outside so I was trapped, alone, in bed with no way out and I wondered would I panic or stay calm. Then I woke up. There's a bit of madness that comes with grief, especially when it's pent up, locked inside.

Next, I dreamed about Josh Groban. I was on stage and he was in the audience and I was telling him how much I love his "February Song" and today I found a very poignant video of it on YouTube. "Where has that old friend gone?" And of course, now I realize that for me it refers to John who went away in February. Two weeks ago.

I'm commuting between Hastings and Barking for now, until things get sorted - the funeral first and then the aftermath. I'm John's next of kin here, his close friend and I'm also responsible for the Pallottine community in England so, I'm Father to Paul who was John's assistant as he deals with the shock that has descended upon him and the parish community. All day every day he kindly and beautifully listens to the sorrow of his people, absorbs it. They console each other. We are here for him - mostly Tom and me but other members of the Pallottine community as well. As is usual in our Pallottine way of life there is a great communion of Love between us and the people of our Parish Communities. 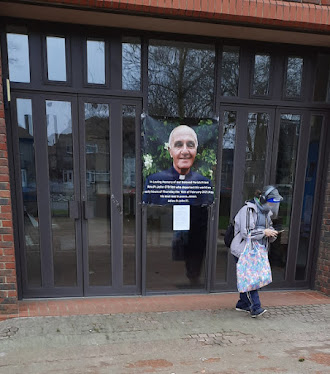 It's good for me too – and for Tom - to be in the place where John lived, the place filled with his presence, touching what he has left behind, his absence. It's easier to be here than away from here. Strangely, every other place is unbearably empty, places I normally love.

The voice of Dr. Gehan is one of the blessings of the past month, a sound that became familiar on my phone while John was in hospital. And afterwards too. I didn't have to go chasing him to know what was going on. It was he who reached out to me from the start, keeping me up to date regarding John's illness. It was he who offered to get me the permission to visit John and always expressed his concern for my own well-being in the situation. We only met once, very briefly a day or two before John died and I was surprised at how young he is. Surprised that one so young has such a profound and mature empathy. He is never in a hurry to end the conversation and after John died, he phoned to sympathise with me. And when I sent a thank you gift to the staff, he left a message on my phone to say he is thinking about us all. A rare degree of selfless attentiveness, the same attentiveness that is reflected in all the staff we met in ward 5a at Barts. All of this was not just good for me but for John's family far away at home. To know the level of care he received.

The funeral rites began this morning with the arrival of John's remains to his Parish Church of St. Thomas More, resting before the altar where he celebrated Mass, laid out in his ordination vestments prepared recently by Father Tom Daly and Bernie - John’s good friends of many, many years. Father Paul led the prayers and later we will celebrate a “private Mass” with the Bishop Alan and the Pallottine community. There’s no such thing as a “private Mass” but like all funerals in this time of restrictions we are limited to small numbers. Again, the Bishop has been very thoughtful and considerate. Later today and tomorrow the people of the parish will come individually or as families to say their personal farewell and all the Masses in the parish this coming weekend will be offered in memory of Father John.

The date for the funeral in Ireland has yet to be decided but hopefully it will be next week, and I will travel with John’s coffin, please God.

This is a day of waiting, keeping vigil with the silence of a Holy Saturday in it. As I prayed morning prayer from the Divine Office, I was pleased to see that John’s favourite line of Scripture occurs – “With joy you will draw water from the wells of salvation” (Isaiah 12). For him and for me it goes back to our early days in the Charismatic renewal when we were newly alive in the Holy Spirit. We were at a prayer meeting in the college in Thurles. These words came out of John like a prophecy and immediately out of me came “this is my beloved Son. Listen to Him,”

It’s the kind of thing that would happen – one of us would say something that the other was thinking, or we would complete a sentence that the other began to speak. One day we were visiting a friend when in a moment of silence these words rose up in me and came out of my mouth, “Your peaceful presence giving strength is everywhere” and John followed with the next line which he had already been thinking about, “and fallen men may rise again on wings of prayer.” From a hymn in the Divine Office. We completed each other’s words.

Complete! It’s a word he spoke in the hospital. “I feel everything is complete” he said, and I replied, “it is consummated.” The words of Jesus on the Cross. John acknowledged what I said and then, in typical fashion, he made a smart comment!

One last thing for now. Another song that I have gone back to, not one that I like in my head, but it has spiritual and emotional resonance going back to our novitiate in Thurles. “Seasons in the Sun” by Terry Jacks. We sang it repeatedly and loudly as we did the washing up in the kitchen. “We had joy, we had fun, we had seasons in the sun.” And finally, “goodbye to you my trusted friend.” You certainly had your seasons in the sun and enjoyed every one of them.