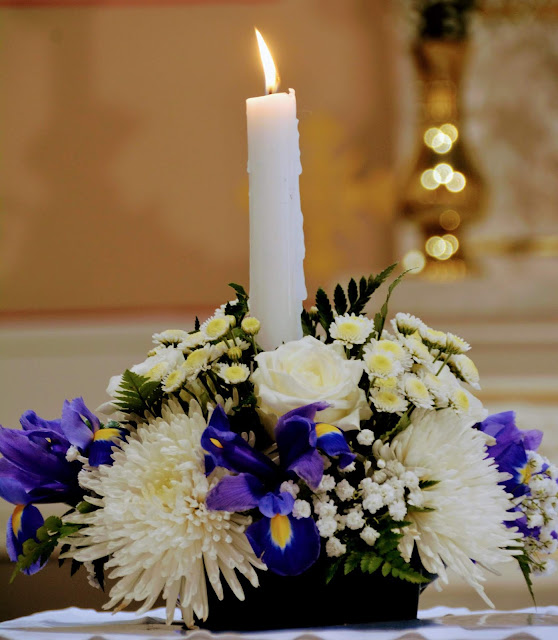 Advent weddings have a special appeal, though couples getting married in December probably don’t have Advent on their minds and are more likely to be thinking in terms of Christmas.


In a beautiful cathedral the Groom stands waiting for his beautiful Bride to arrive. It’s time! All the talking is done and he faces the altar quietly, intently staring ahead, allowing no distraction to deflect him. A single tear falls from his right eye. His three-year-old niece would like to blow out the Advent candles. There is to be no distraction. Twice he has asked me to make an announcement about photography – that no one but the official photographer should take pictures. The father of the Bride thought this to be unreasonable but she had been firm. She didn’t want the photos of her walking up the aisle to be filled with the heads of happy guests leaning out of the pews with mobile phones in their hands. I had never thought of it like that before but it makes perfect sense. It also meant that the Liturgy was an attentive and peaceful experience and I was amazed by the level of reverence in this largely young congregation, 60 per cent of whom were English and most of the remainder were Catholics from near the Border where Catholicism and faith are still held in high esteem.

I’ve come to look at Advent in the context of the wreath with its five candles that has become an essential part of preparing for Christmas. As far as I know no such thing was ever seen in Ireland before the 1970’s and I suspect that our own Pallottine Sister Juliana was instrumental in introducing it. The tradition, like Juliana herself, is German and she was very friendly with Father Seamus Ryan of St. Patrick’s College, Thurles who used to write in Intercom, the liturgical magazine.

It reminds me of a procession light that moves slowly towards Christmas, lesser lights leading to the perfect light of Jesus. This handsome, beautiful couple are also engaged in a procession towards the light, climbing the white steps to the altar to the three wedding candles that represent them, first as separate individuals and then as “one body” after they have consecrated themselves to each other and to God. Their wedding took place on the feast of St. John of the Cross whose “Living Flame of Love” came to mind, an appropriate image – the living flame of God’s love that burns in each of their souls uniquely, coming together into one living flame, a new reality that had not before existed. It is a reality that has God at its centre in the most natural way possible, a reality that elevates their love to a higher level, to the realms of the divine, a grace that flows through their sacred humanity, created in the image and likeness of God. The union of a husband and wife is a most distinctive expression of the face of God, the nature of who God is. Where there is love, there is God because God is Love.

Another aspect of the Liturgy that was a source of surprise was Holy Communion. I had given the congregation the opportunity of coming for a blessing if they were not receiving Communion and some did just that but most came reverently to receive, understanding what they were doing, knowing how to receive. Not coming up just for the sake of it. It was very inspiring.

Later at the reception a really nice young Dublin man approached to say how much he loved the Mass. “You know yourself” he said “how boring Mass can be!” “Not really” I said. “But you’re a young man” he said, “you know what it’s like! But this was different!” I laughed at the “young man” bit! He wasn’t drunk but perhaps his vision was slightly blurred!

During the reception the groom’s brother and best man took me aside for a chat, holding my hand all through. We’re cousins. He’s not one for standing still but stands still for a while with me, a man who is incredibly energetic, bright, a lawyer, a lover of fast cars, taking part in car rallies, plays rock music and swims in ice pools in Siberia or somewhere like that. We talk about Le Mans 66, the movie which I saw recently. He has driven in the reality of Le Mans and wants me to join him there sometime. But I think I’d die of a heart attack at such speed. And then he spoke to me about prayer – he doesn’t regard himself as a proper praying person but he puts himself in God’s hands every day which I think is a sublime prayer, the prayer of surrender. He’s almost half my age and thinks much too highly of me, though I accept the absolute sincerity of his admiration. We have a real respect and love for each other.

His trust in and surrender to God which is done with childlike simplicity is very much part of the Advent spirit. It’s what Mary and Joseph did in their own way, allowing God to do what He had chosen to do in their lives, even when it differed from their own good wisdom. It’s trusting a Wisdom that is higher than human, letting God have His way.

It was with such trust that Joseph heard the Word of the Angel Gabriel, “do not be afraid to take Mary home as your wife!” And did just what the Angel told him to. “Take Mary home” is the phrase for the fourth Sunday of Advent that resonates with me and it connects with the beautiful poem of St. John of the Cross, “If You Want”, which my Camino Companion Mark sent to me at the beginning of this Holy Season.

Under the roof of your soul you will witness the sublime intimacy, the divine, the Christ taking birth. I read these words to a man in a Care Home today. His illness has left him largely speechless and depressed but his eyes and his hands communicate something strong, as intent as the Groom on his wedding day. “I am no use” he manages to say but I hold his sacred hand that fills my entire being with grace and, placing my other hand on his chest and I said, “this is the stable, this is the soul under whose roof the divine comes to birth.” He nodded his head. And it is worth repeating and remembering that it is in the stable of our lives, the most unfit, unclean that the divine, the Christ comes to birth forever.

So, I take Mary home to my soul, let her take shelter under the roof of it, knowing that she bears within her the reality of Jesus who is the point of it all. He is perfect Peace, perfect Wisdom, perfect Love and there is no other to compare with Him in the entire universe. How blessed we are to know His loving kindness that visits us like the dawn from on high.