A RIVER IN THE DRY SEASON: Remembering Shirley, Twenty Years On 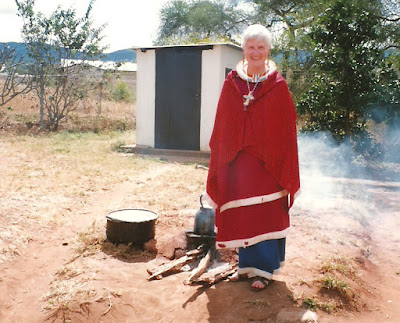 “When I’m Sixty-Four”, the Beatles song from 1967! I sang it back then when I was twelve, wondering what it might be like to be that old! And now it’s happened. I’m 64 and slowly losing my hair. I don’t want to lose it altogether and it’s amazing how important hair is to us, to me! And it reminds me of Shirley who, this time twenty years ago was in the last months of her life. She had cancer, a brain tumour for a few years. I was with her before she had surgery in 1997 and she said to me, “oh Eamonn, what if I die without my hair!” She had beautiful hair. A beautiful woman, with a beautiful mind, heart and soul. So much to lose.


I’m thinking of my last journey to see her. We became friends, soul mates in Makiungu, Tanzania when I was a young priest and she a more seasoned missionary. In her I found a hearing and the freedom to be myself. The jacaranda trees, the airstrip at sunset, the starry sky - if these could speak, they would tell so much of our shared life. And our friendship had a lot of laughter in it, laughter which erupted and poured out of us on different occasions. Shirley was pure and had an innocence that gave her a great capacity for wonder and gratitude. She was free to admire, to admire me or anyone else. In her presence there was no room for low self-esteem. She quieted my self-criticism, which is sometimes harsh, and left me feeling like I was the best thing ever.


So, I arrived in Boston in February 1999 and saw this old looking woman standing alone with a stick. I had to look twice to be sure it was Shirley. As a result of treatment, her lovely straight hair was replaced by a curly wig, which seemed so out of character. She was so frail but her enthusiasm and joy were still there. The cancer by then was in her spine and she knew she was going to die but intended to “live until I die”. She, like me, looked forward to seeing Jesus face to face. We spent days talking about the past, the friends we shared, our concerns about our families and about suffering and death. She was afraid of pain but had a strong sense of offering it in union with Jesus for the salvation of the world. She had total confidence in God and expected that in death he would come running to meet her and pick her up in his arms. She emphasized that she knew she was a sinner but she trusted completely in the love and mercy of God.

There's something about February! This time last year I had the virus that laid me up for a month. For part of that time Fr. Tony was looking after me, trying to persuade me to eat and when I said I wasn't hungry he replied, "you are hungry, you just don't know it!" That was news to me. I always thought that if you were hungry you would feel it.

That in turn makes me wonder about how many people are spiritually hungry and don't know it and are depriving themselves of the spiritual nourishment they need. Starving themselves to death spiritually. Which brings me to this weekend's first reading from Jeremiah.


When I was in Galapo Shirley would come for retreat with me and on one such visit, during the dry season, we went for a walk. All the land was a hot, dry, red dust and it reflected my soul in the spiritual desert where I happened to be at the time. We suddenly came to a little valley through which a river flowed and on its banks the trees were rich and full of fresh leaves. So much like the piece in Jeremiah 17:7, “Blessed are those who trust in the Lord. They shall be like a tree planted by the water, sending out its roots by the stream. It shall not fear when heat comes, and its leaves shall stay green; in the year of drought it is not anxious, and it does not cease to bear fruit.” It was an oasis and a surprise to us that so close to the drought the water flowed. A sign to us of what is possible in the Spirit.  In order to find the water that quenches our thirst we need to feel that thirst; in order to find the river that nourishes our dryness we need to allow ourselves to feel how dry we actually are.

The river in which the Christian needs to be rooted is the Spirit of Jesus; the essential food of the Christian is Jesus in the Eucharist. We set ourselves close to Him in order to live. It's what Shirley and I found together in Jesus. An exceptional blessing.


After I left Tanzania in 1986 our opportunities for meeting were limited. The bond of love built up between us was strong enough to survive the distance and at the same time we were free enough of each other not to cling. Our bond was nothing other than Jesus and the mystery of his life, which we share. Whenever she was home on leave, she would come through Ireland and we’d manage some time together. I also got the chance to see her in Tanzania in 1992 and a couple of other times in Boston.


In August 1997 she phoned to tell me she had returned home to Boston because she had a brain tumour. In May of that year, before she knew she was ill, she told me how she had made a complete surrender of her life to God and she was open to whatever would come. I went to Boston in early September and was with her in the hospital for a couple of days before her operation. I found it hard to cope with what she was going through and felt utterly helpless and silent. There was a lot of silence between us, a helpless silence, a truthful silence and a peaceful one. She was so pleased that I’d come all the way, it was enough for her that I was there and that I would hold her hand.

Intimacy, though, has its limits and there is no way of entering completely into the core of another’s suffering. In the face of Shirley’s suffering and the possibility of her death, I discovered in a new way the aloneness of the consecrated life, the aloneness in which only God is present. She was keenly focused on God and she was also, as a result of that, very focused in reality and she was never shocked or repelled by the messiness of another human being. So, it was safe to be with her. In this she had the attractiveness of Jesus himself, the attractiveness which made him so approachable to the worst of sinners.


My week with her in 1999 was a retreat, a haven of peace. We shared the basement of the convent in Somerville and in the mornings, I would make us coffee and bring it to her room where we talked endlessly or didn’t talk. I could tell her anything. We could tell each other anything and in my presence she would remove her wig which I think took great courage and trust. Her fear of dying without her hair had already come true but she had also conquered that fear.


We went to see “The Taking of Christ”, the famous painting by Caravaggio and as we stood there gazing, it seemed that His and her faces mirrored each other, each one sharing the suffering of the other.


We watched a lot of videos in the evenings, one of which was a concert of Andrea Bocelli. It was then I saw and heard for the first time his duet with Sarah Brightman, “Time to Say Goodbye”, an appropriate song for us as we were about to part from each other for the last time on this earth. I also thought how much my sister Maura would like it, which she did when I played it for her, not realizing the significance it would take on six months later.


One of the last things Shirley said to me in was “when I die, I will love God all the more for having loved you.” What a lovely thing for me to hear and to know!


On May 25th, returning from another journey there was a note pinned to my office door that simply said, “Shirley died.” The news, the reality of it tore a hole in my middle and all I could do was curl up on my bed. My young student community were very thoughtful of my loss and looked out for the one who was sent to look after them. The mercies of the Lord are never over and love comes to us in many forms.