THE MAN WHO ROBS YOU: Crucifix Taken and Retrieved 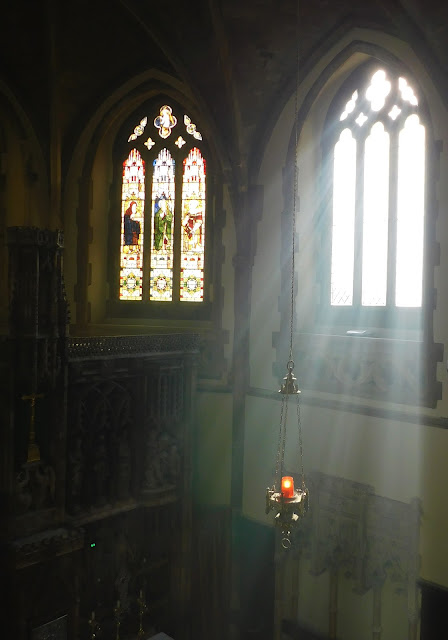 “Give to everyone who asks you, and do not ask for your property back from the man who robs you.”

In the scheme of things, it’s not that big a deal. No one died or was injured. When we came to celebrate Mass on Tuesday morning our lovely crucifix was missing and nowhere to be found. Presumed stolen! My concern was that this was becoming a pattern because the previous week it was our most precious chalice (other chalices have been taken in the past) which was discovered later for sale in a shop. The embarrassed owner gave it back for nothing. When something is stolen from us we feel it like an invasion and when something sacred or holy is stolen it hurts more.

We made a decision to keep the church open throughout the day as much as possible so that people passing by could drop in to light a candle, say a prayer, sit in silence or even sing out loud! It happened one evening that I came on a young couple doing just that – singing. People comment on the peace that is to be found in the building and I want that experience to be freely available. Our church is a house of peace, “a house of prayer for all peoples” as Jesus has said. It is He who is present!

When something gets stolen it feels like an invasion, a desecration of the sacred and the temptation is to close the church in order to protect it. But that would be like giving in, defeating the purpose of the place.

I decided to put a post on facebook with a photo of the crucifix in its rightful place on the altar and my hope was that someone might come across it and let us know. Nobody did come across it but there was a very big response to the post.

In the afternoon I decided to do a little tour of the second-hand shops, places that I never visited before and I was quite surprised to see just how many old crucifixes there were on sale and well as statues.

Not being too good at confrontation I wondered what I’d do if I actually saw our crucifix and I said a prayer to God to make me do the right thing. And then I saw it with its distinctive St. Benedict’s medal, in a glass cabinet. My skin tingled! So, I just took out my phone, brought up the photo of the crucifix on the altar and, without saying a word, I showed it to the shop owner. His eyes opened wide in recognition and he phoned the man who had sold it to him. I spoke to that man on the phone and he offered to send me a cctv photo of the person who sold it to him. I was about to say yes but something in me said no! I didn’t want to go down that road. So, I happily went home carrying the cross!

I went on facebook to let people know that the crucifix had been recovered and was struck by one of the comments that said, “Maybe, just maybe, they were in desperate need?” and I accepted that, agreed with it. Then I went to look at the readings for next Sunday and it is all about forgiveness but I laughed out loud when I read these words of Jesus, do not ask for your property back from the man who robs you! There in front of me was a command I had just disobeyed. I could not now disobey further by not forgiving and I was happy that my instinct was not to seek justice by going after the man who had taken the crucifix.

Luke 6:27-56 is a seriously challenging Gospel for all of us – every single word of it goes against our human grain. Everything in it demands that we be more than human in our responses, demands that we be divine. And even when we catch ourselves living out our natural instincts, we are called to challenge those instincts and strive for what is higher, to stop before we speak, before we write a response, before we act and ask how would Jesus respond.

“Love your enemies, do good to those who hate you, bless those who curse you, pray for those who treat you badly. To the man who slaps you on one cheek, present the other cheek too; to the man who takes your cloak from you, do not refuse your tunic. Give to everyone who asks you, and do not ask for your property back from the man who robs you. Treat others as you would like them to treat you. Be compassionate as your Father is compassionate. Do not judge, and you will not be judged yourselves; do not condemn, and you will not be condemned yourselves; grant pardon, and you will be pardoned. Give, and there will be gifts for you: a full measure, pressed down, shaken together, and running over, will be poured into your lap; because the amount you measure out is the amount you will be given back."

Today in the context of forgiveness I was thinking of the woman with the silver car who has been parking here without permission and has been quite insulting with people. I have left messages on her windscreen and have been tempted to report her and sometimes feel quite angry with her but something keeps telling me not to judge her, to make allowances for her, to be Christian, Christ-like in the way I think of her. And I was almost feeling self-satisfied about all of that when I was driving back from a meeting today and I arrived in the church car park to find that she had parked in my space. My blood boiled for an instant and I was planning to write another message when I could sense God saying to me to pull back. And anyway, it’s not my space even if it has my title on it. In any case I should not be possessive of any space or title. These are not the things that life is made of. So, instead of a message I put a small prayer card of the Holy Family under the wiper on her windscreen. And I took the Housekeeper’s place instead!

Forgiveness does not necessarily mean that I have to have a relationship with the one who has hurt me but, when the crime causes injury or to another person, then it has to be put into the hands of the civil law.

Saturday morning before Mass we discovered that our Holy Oils had also gone missing from the sacristy and that was seriously annoying because we had a baptism scheduled for midday and the oils were needed for that. The oils are contained in three beautiful round brass containers in a black box. But again I had to tell myself that, however inconvenient, this was not a matter of life or death. Thankfully we were able to borrow oils for Good Shepherd parish in St. Leonard's-on-Sea. The baptism was delayed a bit but it was worth the wait. Beautiful child. Happy parents.