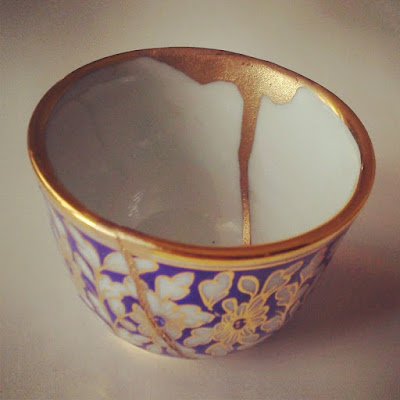 You wake up feeling like you've been hit by a train and, on a day when you've absolutely nothing to do and you want to stay in bed, you're awake too early. It's Easter Monday morning and a second sleep isn't happening.

Over breakfast my mind wanders back over the past few days – all the ceremonies of Easter from Holy Thursday to Easter Sunday, the images and sensations. It was like being immersed in an intense ocean of Mercy, exhausting and exhilarating. After the family Mass yesterday morning my arms were full of chocolate bunnies, cards and cakes given mostly by the children. Symbolic of the fullness of heart and soul.

I’m reading an article by Liz Dodd in the Tablet about one of her cycling adventures. Two words register with me - "breaking" and "solitude" - and a quote from Thomas Merton at the end of the article, "As soon as you are really alone you are with God."

I am really alone now but I want to avoid both God and solitude, not to mention breaking. Still, I go off and pray for a while and enjoy the loveliness of the quiet morning church but you can pray and at the same time avoid God, be alone and avoid solitude.

When a gap appeared in the rain I took myself off down the seafront for a brisk 6km walk. It's great to have my energy back, though I've yet to be restored to the rhythm of the daily walk. It will come.

It was back in the solitude of prayer this evening that the word and the reality of "breaking" raised its unwanted head. The image of a shattered china cup! I am the cup!

The cup brought me back to the Royal Tara china factory in Mervue where my Dad worked for years and I worked there for the summer holidays from the time I was 13. It was one of the very good experiences of my life.

I got to know the whole process of making china cups from beginning to end and even dreamed of training as a potter. I didn't just get to know the process but came to identify myself with it. I was the cup from its beginnings as dry grey clay, though its shaping into the mold, the various stages of intense burning heat that it had to go through until it emerged white and shining before being skillfully decorated, gilded and burned again. What it takes for a cup to become the beautiful thing it is; what it takes for us to become what and who we are designed to be.

And then early on, so early on in life the cup breaks. We break because we are broken by various others and experiences in life, a brokenness that goes on through youth, adulthood and becoming older. Not just broken but shattered at some level of life, in smithereens in some unconscious, covered-up depth, a state that exists even when we are happy, doing well, fulfilled and at peace.

It's as if God uncovered a little bit of that hidden unconscious part of me this evening, not to make me suffer more but to remind me of this simple truth that we did not initially break ourselves but were broken. Of course all of us have done some self-breaking and breaking of others over the years but a lot of that is a consequence of the original breaking that was done to us.

While as adults we have to take responsiblity for our lives now, what I think God is trying to get across is that I cannot repair myself, we cannot repair ourselves; that we need not bear the burden of guilt for not being who or what we think we should be. Guilt is a guest that the broken regularly welcome into the house of the soul.

I cannot repair myself! And I cannot do the good that I want! It's something akin to the spiritual conflict that St. Paul speaks of in Romans and Galations: “I do not understand my own actions. For I do not do what I want, but I do the very thing I hate” (Romans 7:15); “what the flesh desires is opposed to the Spirit, and what the Spirit desires is opposed to the flesh; for these are opposed to each other, to prevent you from doing what you want” (Galatians 5:17).

This brings to mind a line from Psalm 59, a prayer addressed to God that often spontaneously surfaces in me, "repair what is shattered!" And then something that I'm barely aware of comes to mind, a fleeting memory of a Japanese art of repairing broken crockery.

So I google it there and then! This is what I found in Wikipedia: Kintsugi ("golden joinery"), also known as Kintsukuroi ("golden repair"), the Japanese art of repairing broken pottery with lacquer dusted or mixed with powdered gold, silver, or platinum, it treats breakage and repair as part of the history of an object, rather than something to disguise.

God is the potter, the craftsman who repairs what is shattered, not by disguising the damage but filling it, replacing it with gold. The gold veins are primarily testament to the reparation done by God in our lives. It is a slow and patient process and I simply have to trust in it, trust Him and accept the way in which He does it. This is resurrection now! A foretaste of the complete resurrection to come!

If you will not bear the Cross you can't wear the Crown - words from a hymn we used to sing back in the 70's! Someone asked me why we have the Easter Vigil so late and I told him that the resurrection took place in the darkness before the dawn. "It was very early on the first day of the week and still dark, when Mary of Magdala came to the tomb. (John 20:1)

In order to connect with the reality of the resurrection we have to come to it through the dark of night; it is necessary to come to the tomb, to a place of emptiness and weeping before we can reach the joy of resurrection. It was in the dark and by the empty tomb that Jesus entered into Mary's sorrow and led her to his own joy.

I had the privilege of visiting Calvary and the tomb of Jesus back in 1999, a month after the sudden death of my sister Maura, a death that left me and all of us shattered. At such an early stage of grief there was nothing in me that wanted to go on pilgrimage with a lot of very religious people. But I was signed up as the spiritual director and felt obliged to go.

Celebrating Mass on Calvary was something special and after Mass we got the opportunity to pray privately at the spot of the crucifixion - a hole in the ground under a small altar.

I went in there, placed my head over the hole and lay all my grief there. And there came a most beautiful scent that made me think there must be scented oil in the hole, so I put my hand down but found only empty space.

When I rejoined the group I spoke of the beautiful scent but no one else had experienced it so I felt then that it was God's way of anointing my grief, honouring the honesty of it. It's tempting in religious circles to spiritualize something as traumatic as grief and even to deny it but I could not - it was too raw and it was the rawness of it that I gave to God in that place.

From there we went to the tomb of Jesus and again it was an honour to enter into that space. When we all had gone in and come out one of the more zealous women in the group said, "you have to leave Maura here now!" And with that the floodgates opened! I cried and cried until every tear was spent.

An austere looking Greek Orthodox monk had observed my sorrow. He was keeper of the candle shrine behind the tomb and he handed me a candle for me to light there. It was a wordless and kind gesture, a gift of grace, a gift of light which I accepted as another anointing from God, another acknowledgement of the truth of my sorrow.

Both of these experiences teach me that if we have the courage to enter into the dark of night and wait in the emptiness of the tomb, then we will experience some kind of anointing, some taste of resurrection. God is faithful.
+++

Later I was to experience two dreams about Maura, dreams that speak of  resurrection and on the Camino I had a most profound experience connected with the tomb, an experience in which I discovered the tomb to be a place of new beginning and new life.