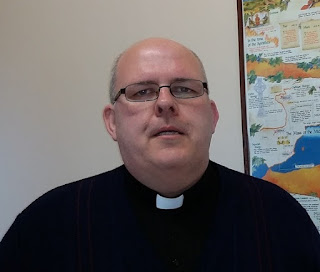 On this Sunday last year we were faced with the sudden death of Fr. Seamus who was swept away from this world in the space between the two Sunday Masses. We remember especially in prayer his mother Mary and his family for whom this day is especially lonely.

I was Rector of the Student House in Dublin when Seamus joined and I have many memories of him but one in particular stands out. I had come back from a walk in Marley Park and found Seamus with Noel O’Connor sitting at the table in the kitchen. They were talking about farming and animals and Noel asked Seamus what would be the first thing he would see when he walked into a field of cattle, something Seamus was very familiar with. Seamus sat erect and in his direct way he replied, “I’d see the strong animal first!”

I was asked the same question, though I’ve seldom ever in my life walked into a field of cattle. In Marley Park I had just spent a while with a swan that had a broken wing, something I did regularly and there seemed to be some kind of connection between us. What is broken attracts my attention. So in answer to Noel I said, “I suppose I’d see the weak one first!”

The strong and the weak! Seamus and I were two sides of the same coin. While I tend to get absorbed into the sufferings of others to the extent that I become as helpless as they are, Seamus had in him a strength that those who suffer found supportive and redemptive.

He had in him first of all his own experience of the healing, redeeming love of God and this, together with his experience of suffering, gave Seamus the capacity to identify with the sufferings of others, with their struggles. They found comfort and hope in him. And I’m sure his dry sense of humour also gave people the lift they needed!

Jesus sums up the commandments, condenses the ten into two, and condenses them into Love. They are in essence the way of loving in this world. What Jesus says of the first is very striking, “you must love the Lord your God with all your heart, with all your soul and all your mind,” while the Book of Deuteronomy uses the phrase “with all your might!”

We often limit our loving of God to the bare minimum but this loving of God that Jesus speaks of is total and it is mighty. That was the kind of strength of loving that was in Seamus. He gave his “all” to God and this overflowed into his care for those who suffered.

There’s no better way to be prepared for death than to be loving God with that kind of passion and loving one’s neighbour with the same love. At least to be striving for this.

The suddenness of Seamus’ death stops us in our tracks and reminds us of the need to be living in a prepared way, not taking either life or death for granted but honouring both. It’s typical of many of the Saints, including Vincent Pallotti, that they lived each day as if it were their last. What would I do if this were my last day? What would Jesus do; what would He have me do? Questions worth pondering without getting morbid or panicked!

What better way for a priest to die than on a Sunday morning having celebrated Mass with the parish community and to be getting ready for a second Mass. What better way for any Catholic to die. It was a grace given to my own mother that she died during Mass.

And there’s that little act of service in between, an act not to be undervalued – Seamus went to his kitchen to get milk for the tea down in the parish hall and in that act he died. It was his last act of service that was part of a whole life of service. A reminder to us of the sacredness of little acts of service and kindness!  As Jesus honoured the glass of water given, so He honours the jug of milk that Seamus went to fetch!

Not to be forgotten was Seamus’ love for the Blessed Virgin Mary who played a central role in leading him to her Son and kept him near to her Son Jesus. May he rest in her embrace in the new Cenacle of eternal life.