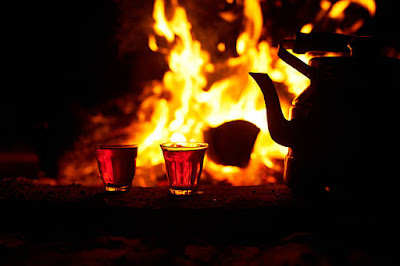 A campfire in the Sahara Desert, beneath the canopy of a pristine night sky, brilliant moon. The Berber men are showing us how they bake bread in the sand. We break fresh bread, drink Moroccan tea, some of the group sitting, some of us standing in the glow of flame.

Ahmed, the chief camel herdsman, sends one of the priests to say he wants me to come and sit beside him on the sand and when I take my place, he puts his arm around my shoulder, drawing me into himself. A tender and intimate moment of reverence. Throughout this journey he has had a profound respect for my age. Like everything in life this is not just a physical and emotional human connection; it also has a spiritual and divine dimension. It’s as if God Himself has invited me to sit beside him, that He has chosen me for this. We all like to be chosen, to be picked out for closeness to another at all levels of our nature.

When James and John approach Jesus, asking Him to “do us a favour”, they are, on the face of it, looking for special privilege but at a deeper level they are expressing the desire of friendship that wants to sit next to Jesus for all eternity. It is the boldness, the confidence of friendship that impels them to the throne of Grace (Hebrews 4:14-16) to seek such intimacy with Jesus.

But the mistake they make is that they do not wait to be invited and instead reach out to claim for themselves this gift of Grace, a mistake that is made so often in life. We claim and take too soon, instead of waiting for the gift. It’s something Jesus refers to in the Gospel of Luke chapter 14:

“When someone invites you to a wedding feast, don’t take the most important seat, because someone more important than you may have been invited. The host, who invited both of you, will come to you and say, ‘Give this person your seat.’ Then you will be embarrassed and will have to move to the last place. So when you are invited, go sit in a seat that is not important. When the host comes to you, he may say, ‘Friend, move up here to a more important place.’ Then all the other guests will respect you. All who make themselves great will be made humble, but those who make themselves humble will be made great.” (NCV)

Isn’t it the mistake that people have been making from the beginning in Eden – reaching out to take what is not ours to take (Genesis 3). James and John would be better off waiting for what Jesus will offer them.

What He offers them is something far greater than sitting beside Him. “Can you drink the cup that I must drink?” And with this question He is offering them interior intimacy with Him. To drink the cup is to drink in the life of the other, receiving that life right into oneself.

As a little boy one of the loveliest things at our teatime table at home was to be given tea to drink from my Mother’s cup. Her tea tasted special and, even though I didn’t have words for it as a child, somehow I understood that I was not just drinking her tea but I was also tasting her, drinking her life into me.

We don’t really get what Jesus is saying when He speaks about drinking the cup. A hint of His meaning came to me in Rome with Sharif whom I had met in Piazza Navona where he had a stall selling something or other. We were friends back then. He arrived at our church one day when I was sitting alone in a reception room, drinking a glass of wine that I had been sharing with a newly married couple. I asked Sharif if he would like some wine and he said yes. But when I got up to get him a glass he said, “I will drink from your glass” and I replied that we had plenty of clean ones. And he pleaded, “no, please let me drink from your glass!” And I went ahead and gave him his own glass. And there I had missed the point. Missed a precious opportunity.

It was only when I went to live in Tanzania that I understood what Sharif was asking of me. In wanting to drink from my glass he wanted to drink my life, thus deepening a friendship in which we would be bound to each other in loyalty. It is a bond of friendship that is akin to the bond of marriage; it is for good times and bad times alike.

When Jesus asks us to drink His cup, He is inviting us to drink in, to taste and take His whole life into ourselves as He has taken our lives into Himself. “Whoever eats my flesh and drinks my blood lives in me and I live in that person” (John 6). So, we are not now beside but within, sharing in every aspect of who He is – the wonder and beauty, the sorrow and suffering.

We’re happy enough to take part in the wonder and beauty but when it comes to the suffering we flounder, confounded. We have questions, doubts, even lose faith altogether. Suffering is part of the journey of life in Christ. We don’t suffer more or less than all other people but the difference for us is that we know we suffer with and within Christ and that makes all the difference, gives it meaning and purpose. Not a meaning that we can put into words, but the experience brings us to a depth of groaning beyond utterance, a groaning that is the prayer of the Holy Spirit rising up to the Father.

During the week I was called to anoint a man from the parish, a beautiful man maybe in his eighties who was always a joy to meet. There in his bed he was breathing heavily, with difficulty, almost gasping and on a human level you think that it’s not right for a good man to suffer like that. It’s difficult to watch. But as we sat there in a moment of silence, he reminded me of myself gasping in the desert and it seemed as if Jesus was saying, “this physical gasping reflects the spiritual gasping that is taking place in him. He is climbing the mountain of eternal Life. He is near to the summit and like any summit the final part can be the most difficult. But the relief and the joy of reaching the top overshadows all of the struggle that went before.”

We climb the mountain of life, experiencing every aspect of it, no longer alone, no longer beside but within the author of all life who is within us.

"Can you drink the cup?" asks Jesus. We are already drinking it. And by it we become the presence, the sympathy and the empathy of Christ for all who suffer. 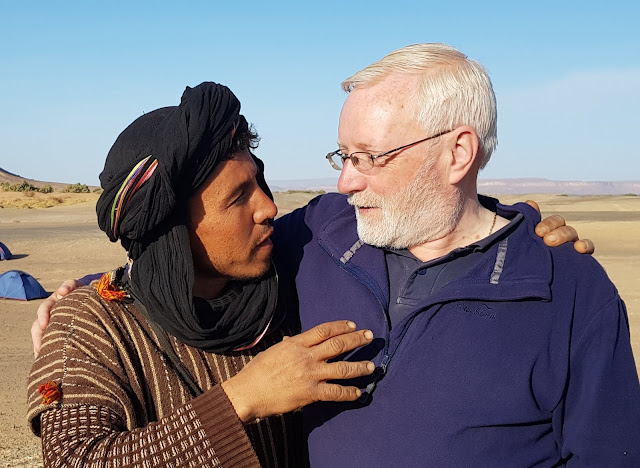