I GIVE MY CHILDREN WATER 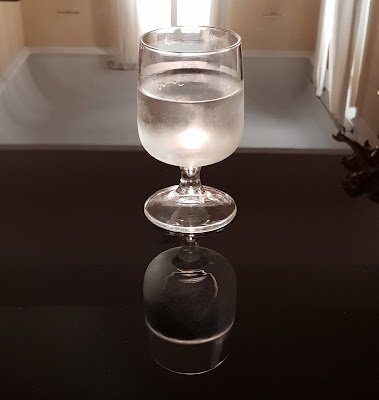 “I give my children water” said the young mother, “so why should I not give them this too?” The “this” is the experience of faith, specifically First Holy Communion and personal prayer. It will be a resource for them when they grow up and even if they stop practising, they will have it within them.
We would never think of depriving our children water or anything else they need for survival. Yet, we are quick to deprive them the water of spiritual nourishment, perhaps because there is no obvious or visible consequence of that deprivation but there are of course hidden consequences.
This thing of faith is a real mystery and I’m very glad to have it and don’t take it for granted. It comes in all sorts of shapes, is different on all sorts of levels, breaking through where it seems not to be at all.
It seems to be a given that artists become at least agnostic, if not atheist. Though that’s not altogether true here in England where it’s possible to be Catholic and artistic at the same time.
The artistic soul of many seems not to be able to remain within the confines of Catholicism, as I read of Sting in the Catholic Herald this morning. A very interesting article about a man who took the name of Thomas for his Confirmation and I was reading this on the feast of St. Thomas – the one who refused to believe unless he could see and touch. Fritz Kretz once said that Thomas was not content with a second-hand experience of Jesus, he wanted a first-hand personal one. And maybe that’s what happens – people’s experience lacks the personal encounter with Jesus. Without that it must be very hard to sustain one’s faith.
I had a funeral here the other day of an Irish man who came to England as a young man and became a hippie poet, falling in love with a young woman from Guyana whom he married, with whom he had three daughters, the woman with whom he spent the whole of his life. It was she who gave the eulogy and what a thing of beauty it was to listen to her, to observe her dignity. It would seem that his Catholicism had fairly much gone out the window but she said, “he remained in his heart of hearts an Irish Catholic.” Indeed, before he died, he was anointed by my colleague Father Tony.
As I contemplated this man created in the image and likeness of God, I thought of Pope Francis and St. Vincent Pallotti for whom this reality, this image of God in us is fundamental in the face of the complexities of our humanity. From beginning to end we are made in the image and likeness of God. No one can take that from us. We cannot even take it from ourselves. It is deeply embedded within us. So, the hippie and the poet in this man are expressions of something of the image of God. What is distinctive in all of us is expressive of that image and our distinctiveness is to be honoured. We should honour it in ourselves and in others. Honour it and not try to change the core good of who we are. The bad in all of us does need to be changed but often we are mistaken in what we think is bad.
Another Irish man whom I was called to anoint had also lost his connection with the Church because he had been badly hurt in a Catholic institution and so was bitterly angry. But still he wanted a priest as the end was approaching. So, I entered into that sacred space of the dying to find Michael the Catholic chaplain on his knees praying the rosary beside the man’s bed. On the other side a woman held and soothed the man who was in great pain. His eyes were wild – with suffering and fear as well as anger. But he grew calm, a calm that I attribute to the prayer of the chaplain as well as to the effect of the sacraments of anointing and absolution, as well as the love of the woman who held him. And it might have helped that I acknowledged the damage and injustice done to him. Apologised for it. Prayed into it.
Something very striking - the woman told me that his hands bleed, have been bleeding for some time. The backs of his hands were covered with large bandage patches. “They are his stigmata” said the woman. That does not surprise me at all, for he had been crucified and though all the externals of faith were missing, something mystical had taken place deep within him, identifying him more with Christ that many of us whose faith is visible.
That’s the thing. You just never can tell. Not even the man himself. Only God knows the true depths of a human being. It is always a great privilege for me to be admitted into the presence of this mystery in another and most of the time I have no trouble finding God in each one.
For many faith is a flickering flame and this is what is said of Jesus in the prophecy of Isaiah: He will not shout or raise his voice in public. He will not crush the weakest reed or put out a flickering candle. (Isaiah 42:2-3) And weakness has a special place in the ways of God. Paul struggled with some unknown weakness, a thorn in the flesh, prayed to God to take it away but God replied, "My grace is sufficient for you, my power is at its best in weakness." So Paul eventually learns to say, "when I am weak, then I am strong." (2Corinthians 12:7-10)
This is where faith takes us - to the encounter with God's strength in our own personal weakness, whatever it may be. It stretches us to the outer limits.
By Huruma Eamonn Monson at July 03, 2021