He asked me to take Him in my arms: RESPECT FOR GOD 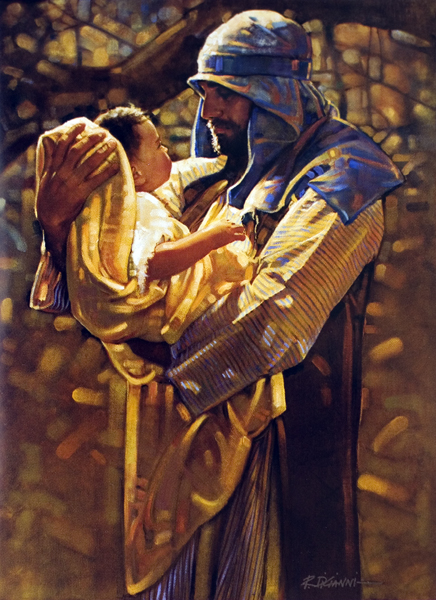 One day in the silence after the Gospel at Mass I picked up St. Faustina’s diary and asked God to show me something that needed to be seen in that moment. This is what I saw, “I saw the Infant Jesus near my kneeler. He appeared to be about one year old, and He asked me to take Him in my arms. When I did take Him in my arms, He cuddled up close to my bosom and said, “It is good for Me to be close to your heart. … Because I want to teach you spiritual childhood. I want you to be very little, because when you are little, I carry you close to My Heart, just as you are holding Me close to your heart right now.” (Aleteia)

There is the danger at this point of the Christmas season that, as we begin to put away the decorations, we might also be inclined to put away the child Jesus, forgetting about this essential aspect of what He came on earth to reveal about who God is, what God is like.

The Word became flesh and lived among us. Flesh is an important word here, a vital part of the birth of Jesus. He is flesh in our flesh, bone in our bone as well as Spirit in our spirit. He came to His own people and they did not recognise Him, did not accept Him. But to all who did accept Him he gave power to become children of God.

It is a meditation worth doing, to close your eyes and imagine yourself accepting and holding the baby Jesus near to your heart, to feel the tenderness that comes to you from Him, to be touched by that tenderness and be formed by it. This is how God is trying to reach each of us, leading us to become children of the Kingdom of heaven, allowing Him near to our heart and each of us in Jesus resting near to the Father's heart.
"No one has ever seen God;
it is the only Son, who is nearest to the Father’s heart,
who has made him known." (St. John's Prologue)

“Respect for Jesus the Son is central to our faith but the sad reality is that in the culture of our time Jesus is treated with disrespect, thrown out, silenced. His Name is regularly spoken with such disrespect, as a swear, even as a curse in so many television programmes and movies. There is no other who is so shamefully treated. Even on our own Christian lips we say “Jesus” – not as a prayer, not with love but as an expletive.”

I wrote the above in October after hearing the Name of Jesus abused in the most disrespectful way ever in a television drama, but the issue of respect for God emerged again in the transition from the old to the new year – 2020 to 2021. A feature on RTE’s New Year’s Eve Countdown caused quite an amount of distress among Christians, particularly Catholics, the most prominent of whom, Archbishop Eamon Martin, wrote the following on Twitter:

“I am shocked that producer/editor of 'NYE Countdown Show' didn’t realise how deeply offensive was a mocking 'news report' accusing God of rape & reporting his imprisonment. This outrageous clip should be removed immediately & denounced by all people of goodwill. To broadcast such a deeply offensive and blasphemous clip about God & Our Blessed Mother Mary during the Christmas season on ‘NYE Countdown Show' on Eve of the Solemn Feast of Mary, Mother of God is insulting to all Catholics and Christians.”

I don’t know if any other religious leaders had anything to say about this but many people wrote to RTE to complain about it. The station apologised in a lukewarm kind of way but refused to take the piece down from RTE player which indicates that the apology actually meant nothing.

While many people complained, it is extremely sad to read the comments that saw nothing wrong with the piece and see it as both funny and part of freedom of expression.

My primary concern is not the offence that I as a Catholic Christian feel but the offence given to God. Reverence for God is at the heart of our religion, spirituality, faith and this reverence is the source from which reverence and respect for other people flow.

To treat of rape as a subject for comedy is unacceptable, those who have been raped must also suffer from such treatment of a traumatic reality. And to bring the name of Harvey Weinstein into it must seriously offend anyone who has gone through those horrific experiences. Anyone who finds this acceptable might ask themselves two questions: how would you feel if you were falsely accused of rape and how would you feel watching this if you had been raped?

August 14, 2020
'Wild at Heart' is the book I came upon in the sitting room at home. Wild is the unmanaged beauty of Ballyloughán, the beach where we swam and played as children, getting roasted by the sun. A brooding beauty. The sombre grey of the sea beneath a vibrant Western sky.  Dark and pale blue, brown and orange with a blazing white setting sun at its centre. The song of curlews echoing. I have gone there every day of my quarantine. Mostly in the early morning.
2 comments
Read more

THROUGH A GLASS DARKLY: In Loving memory of Father John O’Brien SCA

February 21, 2021
Meditation in the Sahara Desert Through a glass darkly. A phrase from 1 Corinthians 13 which was the last piece of Scripture I read to John the day before he died. The same phrase came to me separately and independently from Derry and Tom yesterday so it seems an appropriate place from which to start. In his unconsciousness John’s eyes remained open and, though he could not see us or anything around him in this world, it seemed to me that he was gazing into the Beyond, perceiving dim reflections of the reality towards which he was travelling, the God whom he loved all his life, the God by whom he was touched. "He touched me" was a phrase he liked to use. The Father was uncovering His face to His child and like a new-born baby learning to see, John sometimes looked a bit puzzled as if he was trying to work something out, trying to understand. But the end of that gazing is this, “…we will see face to face. Now I know only in part; then I will know fully, even as I have been
1 comment
Read more