FATHERHOOD: A Man And His Child 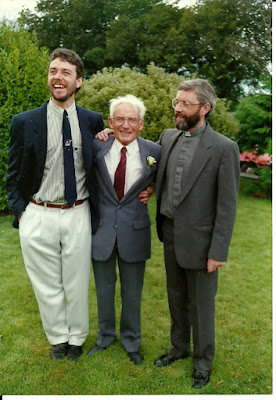 My father has been gone for nearly half my life. I was 35 when he died and one of the simple things I missed was not being able to send him a card on Father's Day, not being able to tell him I loved him in a direct personal and physical way.

But I got used to not sending him cards, I stopped looking at them in shops and gradually Father's Day slipped from my awareness. Often it would pass me by altogether.

This year, however, it has been insisting itself into my awareness. Every time I sat before God in prayer He seemed to be asking me to ponder Fatherhood.

So I did! I even googled the word "father" to see what might come up and the first definition I saw is this, "a man in relation to his child", something that is specific and clear. And while fatherhood cannot be fully lived in isolation, while it exists in collaboration to motherhood, it still has a meaning in itself and is worth celebrating in itself. It's worth celebrating the particular relationship of father and child.

At the 10am Sunday morning Mass I regularly do a walk-about homily, asking questions that the children and some adults are happy to answer but this morning when I asked why we celebrate Father's Day, why we should honour our fathers in this way – I was greeted by silence. One girl shrugged her shoulders and everyone else looked at me in silence.

Already I've been wondering if fatherhood is in decline, is no longer valued much in our society and at Mass today I wonder whether this Catholic Christian community doesn't think much of it either. And I wonder do men themselves value it, especially when they abandon or don't keep in touch with their children.  Manhood itself is in many way a disgraced species in need of redemption.

There are plenty of experiences of bad fatherhood. But there are plenty of good ones too – those who are always there and also those who have had to leave their home because of marriage breakup but who still continue to be good fathers. There are the lost who would be good fathers but are denied access their children and those whose child has died who bear an unspeakable ache.

Then I find myself looking at the young Dad sitting in the pew with his ten-year-old daughter resting her head on his shoulder; the father whose little boy has died, there now with his two little girls playing around him.  These two epitomize the meaning of fatherhood – a man in relation to his child, a man in relationship with his child. That this relationship has a religious, spiritual dimension makes it even more sacred, a most powerful gift from father to child. They share the life of God together in a very beautiful way.

As I'm writing this my brother and his two young daughters call me on whatsapp video. Fatherhood, childhood in relationship with each other. And with me!

So we honour you fathers in your greatness and in your frailty. We praise you and we thank you. While society now tends to demand perfection of us, demands that we make no mistakes – we make unreasonable demands of ourselves and each other – but children don't think in those terms. They can be demanding in all sorts of ways but they cope well with our imperfections and our faults. They operate at a different level, so it's important that you listen to your child.

In a sense it is the child who defines your fatherhood, they tell you who you are, who you are meant to be and become – fatherhood is an ongoing state of becoming in relation to, in collaboration with your child.
I think what it must be like the moment your child was born. You are the same man that you were before with all the same characteristics but your interiior essence is utterly transformed forever. And the first time you child called you Dada and continues to call you Dad or Daddy. Listen to these sounds, the tone and let your child tell you who you are for her or for him, how precious and irreplaceable you are.

Listen too in your heart to the voice of God who is the original Father, the One from whom all fatherhood flows and learn from Him what fatherhood means. I am fairly familiar with God but I went to see what Google might say about the characteristics of God as Father.

It gave some profound theological answers and one website offered 21 characteristics including Loving, kind, compassionate, strong, faithful. And one that caught my attention – refuge – citing Psalm 91: "those who dwell in the shelter of the Most High and abide in the shade of the Almighty, say to the Lord, 'my refuge, my stronghold, my God in whom I trust!'"

It ties in with the image in today's readings of the tree giving shelter and shade. It is what a father does and who he is – shelter, shade and refuge for his child.

It's worth pondering specific qualities of fatherhood that we value. Ones that come to mind from my Dad are humility, gentleness and silence. And he was a man who admired his children, was immensely proud of each one of us ever before we achieved anything in life; he was proud of us for who we were to him. Surely this is something God the Father also feels for each of us – admiration and a holy pride! 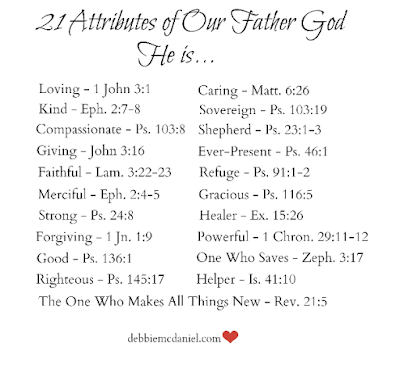