REMEMBRANCE SUNDAY 2019: We Emerge Through The Clouds Of Grief

On the third day of the Camino to Santiago I walked alone the 29km from Larrasoana to Zariquiegui via Pamplona and ended up being the only pilgrim in a private hostel in the tiny village.


While walking through the beautiful city of Pamplona I became aware of how at ease I am in an urban setting. I love the sea, the country, solitude but at the end of the day I am urban born! During the Camino I came to a heightened awareness of the sacredness of the city - the humanity of it, the presence of God in it. Later Pope Francis wrote in 'The Joy of the Gospel': "God’s revelation tells us that the fullness of humanity and of history is realized in a city. We need to look at our cities with a contemplative gaze, a gaze of faith which sees God dwelling in their homes, in their streets and squares.  This presence must not be contrived but found, uncovered. God does not hide himself from those who seek him with a sincere heart..."


The morning of November 4th, this solitary pilgrim celebrated Mass alone on the dining room table of the hostel. Alone and not alone. There is always the Communion of Saints and the whole of God’s People. After breakfast I left Zariquiegui at 8.00 a.m. Dark and wet like the day I set out on this journey, the rain was pouring down, the ascent of the Alto de Perdon muddy and slippery, the fog thick and I might be Moses entering into the thick darkness where God was. The air was filled with the eerie sound of a hundred barely visible wind turbines.


Being Friday I decided to pray the Stations of the Cross internally, arriving at the top of the hill for the crucifixion – an appropriate convergence, serendipitous, providential. The monument there is familiar from the movie ‘The Way’. It is the Mount of Pardon and so I see this as a moment of Mercy.


On my way down the other side at the placing of Christ in the tomb my mind was instantly back at Calvary in Jerusalem 1999 a month after Maura’s death. A consolation was given there in that holy site in Jerusalem, under the altar that marks the site of the Cross of Christ. There's a hole in the ground where I lay down my head with all my sorrow and there came to me a most beautiful scent. Thinking there might be blessed oil in the hole, I reached into it with my hand, finding only emptiness but the scent remained and it was real. Afterwards I mentioned the remarkable scent to the group but no one else had got it, so I figured it was a gift of God to me in my grief. He does that! Afterwards we went into the tomb of Jesus and I placed Maura in it and cried and cried a torrent. Now in this place of the Camino I not only placed Maura but Mam & Dad and my own past with its failure, its pain, its shame.


And the tears flowed again! And though I was totally alone, miles away from anywhere, I tried to hide my tears at first because they embarrassed me. But I dropped my hands and my guard and let go, crying all the way down. 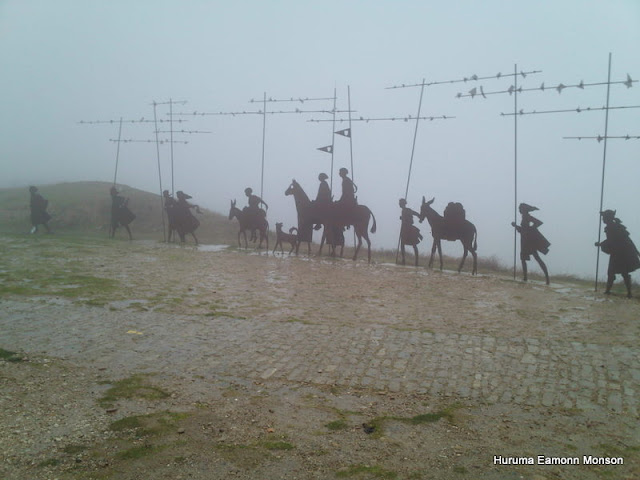 At the base on the other side there is a hint of resurrection. The last breath of the old life is the beginning of an alleluia that comes to my lips but it is a song that will not be sung until it encounters the alleluia of the Holy Spirit. Then life will ignite in me. The opening ceremony of the Barcelona Olympics comes to mind and I think of myself as the flaming arrow shot forth by the archer to light the Olympic flame. That is the journey, the Camino – lighting the fire, fanning into a flame the gift of God. And to my surprise and pleasure, the clouds parted, the weather cleared, the sun shone and I sang other songs. Thus, we emerge through the clouds of grief into the brightness of a new day and those who have died emerge to live in the brightness of a new and eternal dawn.


And I learned that day what I had known all my life but now know at a deeper level, that the tomb is not the end. The graveyard of our sorrows, deaths and failures becomes a place of hope in Christ. It is the location of the resurrection, the transient resurrections of this world and the complete resurrection into eternity. On this Remembrance Sunday, as we pray for our deceased loved ones and all the dead. As Christians we have this assurance that death is not the end. Life is changed, not ended. Our God is the God of the living, "for to him everyone is alive" (Luke 20:38)