It's 7.30 the morning of Pentecost Sunday, the sun shines bright into my kitchen and there is a silence, the silence of seagulls that allows the other birds to be heard for a while. A beautiful, sweet sound that comes from the trees across the way.

My house has had a stale smell lately, so when I got up yesterday I opened all the windows wide to let fresh air in. A strong breeze blew from the outside, circulating vigorously within. I realized that, in the same moment, I was opening wide the windows of my soul, allowing the fresh air of the Holy Spirit to come and fill me, removing what has become stale in my heart and soul and mind.

In the afternoon a pigeon entered through the lower part of my bedroom window, stood there looking happy and curious until he spotted me. He went into a right flap, flying madly around the room, knocking, scattering what got in his way, clawing at the curtain, unable to get out the way he came in. So, I spoke kindly to him but I'm no St. Francis and he didn't understand. In the end I realized I should take down the curtain and open the top part of the window wide as possible. It worked!

Of course, that too served as a parable for me. When we open the windows of the soul to the Holy Spirit, you never know what might come in, things that don't belong, some of them innocent like the pigeon but others not so benign and others dangerous.  We need to stand guard at the window of our soul and, as much as possible, not allowing in what does not belong but also doing what we can to liberate ourselves from them. We achieve all of this by prayer, charity, repentance and mercy.

This is also most specially our First Holy Communion day, with 39 children receiving the sacrament. It's 57 years since I made mine. I go back in my mind.

Doctor Evelyn Tully told me to pray for a baby brother since I was the only boy among three sisters. I was seven years old and my mother was “expecting” as they used to say. I prayed for a brother and Harry was born on May 22nd 1962. Shortly after his birth I made my First Holy Communion, so I think there is something potent about the prayer of a child during that period of life. It must be the purest of prayers.

On the Saturday, the day before Communion, Noreen Carr and I walked on our own the two miles over to Castlegar church to make our First Confession. It was a time in life when two seven-year-old children could go that distance alone and be safe.

Canon Mitchell was inside the box in the middle and I went in the door on the right-hand side. It was dark but I was unafraid; I knelt even though my little head didn’t even reach up as far as the ledge that adults used to rest their hands on. I stayed kneeling anyway, my head turned upwards. The small slide door opened above me and a dim light flowed through. “Bless me Father for I have sinned. This is my first Confession.” And a kind old voice responded. That’s all I remember. It was fine. We ran home delighted.

Next day we walked over to Castlegar again and I think I went with Julia Kilgannon whose son Sean must have been making First Communion as well. Noreen would have been there too. Mam was still in bed with the new baby.

Sister Francis in Scoil Iosagain had prepared us thoroughly and I obeyed everything down to the last detail. I didn’t know then how not to obey. Walking up the aisle in line, hands reverently joined, I was calm with an expectant calm. We were told that our souls would shine bright when we received Jesus in Communion and I didn’t know the difference between my soul and the sole of a shoe, so I was expecting the soles of the shoes of the children kneeling down to shine. We used to kneel for Communion at the altar rails in those days so that I could see the soles of ever child ahead of me. None of them shone and this surprised me, so I thought it must be something else. I trusted Sister Francis totally and knew there would be a shining of some sort.

And shine I did! I felt a brightness within me when I received Jesus and have felt it all my life – sometimes more and sometimes less intensely. It’s there for all of us if we pay attention and give it time.

Jesus in the Eucharist seeks to enter our souls as the food that preserves its innocence and integrity. In Communion He gives all of Himself so that we may be well, that we may delight in Him as He delights in us.

Today we had a beautiful, happy First Communion Mass. The children were wonderful and, in spite of the large crowd that flowed out into the street, there were great moments of quiet. Though, a woman complained afterwards about the noise, saying how disrespectful it is to Jesus whom she loves. I told her that I love Him too. While my personal preference is for silence before and after Mass, I am happy that people feel at home in His presence and I'm quite sure the children delight Him, as is written of Wisdom in next Sunday's first reading:


"I was beside the master craftsman, delighting him day after day, ever at play in his presence, at play everywhere on his earth, delighting to be with the children of men." (Proverbs 8:31) 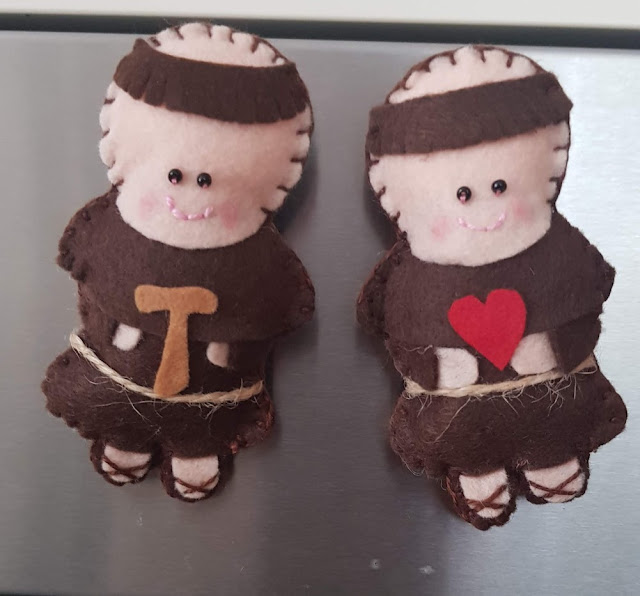 Speaking of St. Francis! After evening Mass on Saturday Ted and his Dad gave me these gorgeous fridge magnets which they brought from Assisi where they visited last week. What a delight!