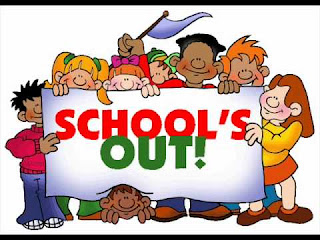 Forty five years ago I spent the summer working in London. It was my first time hearing Alice Cooper and ‘School’s Out’ was big that year.

Today in Hastings school’s out again and I was up in Sacred Heart to celebrate the Leavers Mass – the senior boys and girls who are mostly moving on to St. Richards, a Catholic School in Bexhill. I still don’t know if they call it Secondary School here.

I love children. And the whole school of them was there, plus the parents of the leavers. Yet still I have to brace myself when going into a school. Brace myself, dig deep and stretch myself beyond what I think I’m capable of. It must be something unresolved from my own childhood, though I won’t be going into that too much.

Asking the children what they remember from their first day at school, one lad said that he felt scared. And I said that’s what I felt on my first day. And they all laughed when I told them that I spent the whole day screaming. Which is true! I never liked school from the first moment to the last.

So memories flow once I start thinking! On my fourth birthday Mam asked me if I would like to go to school. You could do that in those days – just send your child to start school any day at any time of the year. My response was an absolute yes. Not because I really wanted to be at school, but I wanted to be with my older sister Maura. There was nobody else I wanted to be with back then. Back then and for the rest of the time that she was on this earth I had a magnetic pull in her direction.

When I got to Scoil Iosagain I was absolutely shocked that I would not in fact be spending my time with her so I screamed for the whole day. Screamed and kicked! I don’t know if anyone understands how traumatized a child can be in such a moment. So I never recovered from that as far as school was concerned.

In Shankill in the early days I shared some of this with Miss Slavin, the Principal. My fear of schools! She listened and, like a therapist she enabled me to relax and grow to love Scoil Mhuire. I’m coming to love Sacred Heart too but there’s a time for adjusting.

At the start of Mass I asked the children, “are you all happy?” and they responded with a resounding “yes”. “And why are you happy?” I asked and one boy put up his hand and said, “because you’re here!” What more could you ask for!

It’s a Catholic school but most of their faces and those of their parents are unfamiliar, though it's important to acknowledge those who are familiar. And I wonder why it is that people are so eager to have a Catholic education but don’t participate in thoe Eucharist. I ask the question, not as a criticism but, my love for Jesus in the Eucharist, my experience of Jesus in Holy Communion makes me want everyone to experience it.

A woman in the parish goes to visit the local hospice which was once Catholic but no longer is. When she knows that a Catholic patient is near death she calls a priest to anoint, absolve and give them Holy Communion. Each of these sacraments is very important and very helpful as death approaches. On one occasion she could find no priest so she herself brought Communion to the patient. Sadly, there was nothing she could do about the anointing or absolution. When she mentioned it to the Bishop he told her not to be concerned because “all of redemption is in Holy Communion!” That’s a reality I like and I would love everyone to be in touch with all of the redemption that is available to them at Mass. Not just redemption for the next life but for now in this present reality.

I’m wondering how to get this message across and I look down and see some of the children with hands joined, eyes shut and focused. You know that something profoundly spiritual is going on inside them, that they somehow “get it” and, maybe that’s it – that some people get it and others don’t and it can’t be forced. Maybe we who get it are meant to live it on behalf of those who don’t, as a kind of leaven in the world.

When the prizegiving is taking place after Mass I’m gobsmacked at the number of activities children are involved in. One of the teachers in his address said that sport brings balance to life and so it does but spiritual exercise is also at least as necessary for balance. We allow ourselves to become spiritually unfit while we pay great attention to being physically fit.

So school’s out for Summer! One last thing! I went to get my hair cut for Brian and Jenny’s wedding next week. The pricelist on the window said £9 and that seemed not too bad for the little bit I have left. He’s a Turkish barber and an artist who would leave Edward Scissorhands in the shade! He flew around my head with such speed, yet not in a hurry. He took quite a while getting me in shape. And the “piece de resistance” was something I never saw or felt before. He had what looked like cotton wool on top of a longish stick, dipped in something, set it alight and came at my ears with the flaming thing. He said it was to get rid of the fuzz on my ears. And I’m all for getting rid of fuzz on every level of life!

I could smell my singed ears and it still only cost £9.

Speaking of Edward Scissorhands – a couple of months ago I was looking after Katie and Laura. Katie said, “I know a secret about Dad!” “What’s the secret?” I asked. “I know his real name! It’s Henry!” “And do you know my real name?” I asked. “Is it Edward?” she asked. And with that Laura piped up, “Edweirdo!” “Yes!” I said “I’m Edweirdo Scissorhands!” “What’s scissorhands?” they asked. So I introduced them to a character they had never heard of before.