In My Heart To Stay: Message from Father Eamonn for the First Holy Communion children

A WELL-WORN MISSAL - Funeral For A Friend

There’s a determined crow on the beach, challenging a seagull that has dared to try taking the food out of the crow’s beak – literally. The crow wins as both birds ascend upwards in battle into the sky, soaring and swooping before descending again to their separate places on the shore. The seagull gives up.

A swan in her place has made a nest of seaweed, ropes and clean garbage. Not ideal I’m sure but she has made something out the reality in which she finds herself and manages to look absolutely magnificent.

We all make do and sometimes we ascend and soar. Sometimes we descend and fight our way through what confronts us. It’s all we can do. Fight and welcome anything that helps us survive.

The other morning, I woke with the song ‘Happiness’ in my head and found myself through the day singing the words, “happiness, happiness the greatest gift that I possess. I thank the Lord that I’ve been blessed with more than my share of happiness.” This is the song that I’m singing as I am mourning the loss of my dear friend. It’s sincere and it’s no contradiction because I have learned times before that happiness and sadness, joy and sorrow abide together in the mystery of Christ. Happiness now is the grace that will see me through this period of grief. And I will go with it. I will be happy, even when I am sad.


Last night I sat for a long time – sanitized, masked and gloved - alone at the foot of my friend’s coffin. Near to the feet in a humble place, the place of Christ. Wounded, tired feet. Feet washed and anointed. The washing of feet at the heart of the Eucharist. In earlier years I tended his wounded body, held him while his mother anointed his wound. Held him and hurt him. Comforted him in a feeble kind of way.

He is free of all that now and is tranquil in repose, laid out in the vestments I sent for him, the alb that Derry got for him, Noel O’Connor’s clerical shirt. Noel a loyal friend gone ahead of him on this journey of faith. Sunlight flowing through the venetian blinds rests on his hands. Luminescence. I touch the hands folded over his breast, temple of the Holy Spirit, his right hand nearest to his heart enfolds his brown wooden rosary – pearl within his oyster.

Outside, his sister stands looking in the window, tears streaming down her face, lips moving in silent prayer. She is Mary weeping outside the tomb of Christ. “They have taken away my Lord!”

I have Michael’s apartment to myself and in the morning I pray in his bedroom where he lived and prayed and died. Pray the rosary sitting on a chair at the foot of his bed, the chair I always sat in when visiting and I stand the glass statue of the Madonna and Child by the window so that it looks like an apparition against the blue sky. 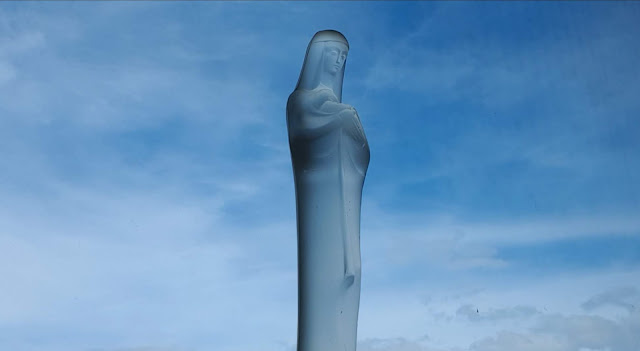 The room represents him. Over his bed is the picture of the Sacred Heart, to his left is an aerial photo of Celtic Park. Between that and the 1916 Easter Proclamation is a picture of Pope Francis. There are many Celtic memorabilia – a scarf, banner, framed picture on the sideboard where stands his well-worn Missal that is testament to his commitment to daily Mass which he celebrated against the odds. I am lonely and at peace in this place.

The prospect of this priest having no Mass at his funeral brought his family to a level of deep anguish that is beyond verbal expression. This priest confined to bed for more than thirty years, for whom the Mass was his meaning, his very existence. It was their anguish that brought me here, it is to this that I offer my obedience. It is very difficult for me to go against what lawful authority demands of me, so the struggle was great and my obedience here is responsible even though it might appear otherwise.

It goes totally against the grain for me as a priest, for all of us priests, not to be able to minister to our community within the church building and again, while I obey our bishops and government, I think it should be possible to hold small services in our churches. If it’s possible to hold funeral services in a Crematorium with a few well-spaced people, the same should be possible in a church building. But we deal as best we can with the reality. Reality is what is. And the encouragement I have constantly offered to my community during lockdown is to find Christ in this reality, to know and believe that something special is taking place within our current hidden lives. Something special like what took place within the tomb.

We celebrated Mass within the constraints of social distancing. It was simple, emotional, effective. The readings chosen came from the Liturgy of December 21st, a choice made by Michael’s Missal that fell open at that page suggesting readings that were very appropriate. The Visitation in Luke 1:39-45 represents the hidden presence of Jesus in Mary, a presence that was hidden in Michael all those days and years, a presence that stirred the longing of the Song of Songs 2:8-14, “My love lifts up his voice, he says to me, 'Come then, my beloved, my lovely one, come. For see, winter is past, the rains are over and gone. Flowers are appearing on the earth. The season of glad songs has come, the cooing of the turtledove is heard in our land. The fig tree is forming its first figs and the blossoming vines give out their fragrance. Come then, my beloved, my lovely one, come…show me your face, let me hear your voice; for your voice is sweet and your face is beautiful.'” It is the conversation that takes place between God and the soul, each one seeking, desiring the other. 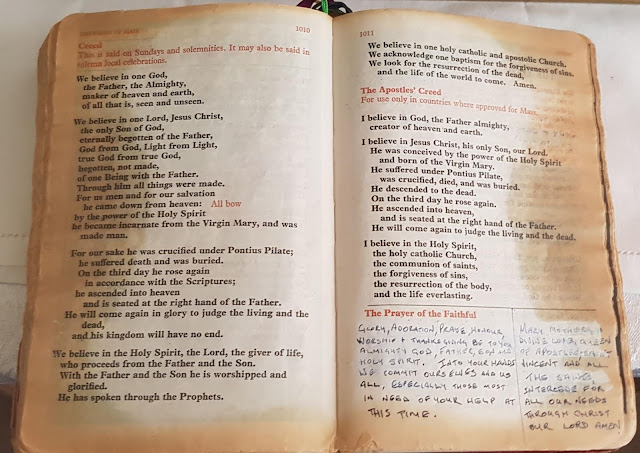 Let me hear your voice! It is my last memory of Michael, how he spoke my name so quietly when I arrived, he who could be so fiery speaking so gently. And as I left, his strong voice following me down the stairs. He knew it was the last time.

At the end of Mass I was given his Missal to keep and I will treasure this greatly because it is so lived in, its edges gone brown with age, the sweat of him that has coloured these sacred pages. And there are prayers written here that he used to say that will remind me of the tone of his praying voice, the expression in his eyes:

“Glory, adoration, praise, honour, worship and thanksgiving be to You Almighty God, Father, Son and Holy Spirit. Into your hands we commit ourselves and us all, especially those most in need of your help at this time.

Mary, Mother of Divine Love, Queen of Apostles, St. Vincent and all the Saints, intercede for all our needs through Christ Our Lord. Amen!”

Michael is buried with his parents. May they rest in peace and may those who survive find the consolation they need as they adjust to the new reality of his absence that will for a while be as intense and vibrant as his years of presence among them. Though his life was a hidden one, the priesthood he lived was shared intimately and inseparably by them. They are what St. Peter speaks of in the second reading of the fifth Sunday of Easter, “…a chosen race, a royal priesthood, a consecrated nation, a people set apart…” (1 Peter 2:9) 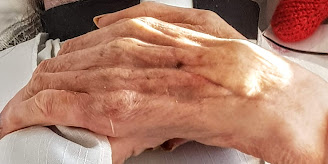