The beginning of the year 1999 was marked by the retirement of Mick Timlin as Provincial Bursar and the first six months of the year were marked by his illness. He really hadn’t been well for the past couple of years but his doctor didn’t make much of it. There was trouble with the prostate and he was on medication. We weren’t satisfied but Mick didn’t want to put pressure on his doctor who, it transpired later, had cancer of which he died.

Mick  became very jaundiced in February and it was decided that something had to be done and he was admitted to St. Vincent’s. His departure from here to the hospital had all the atmosphere of a final farewell and he never really returned except for a short spell. Going down the steps of the Provincial House, looking very frail, he said “I should have done something about this a long time ago.”  His racing green Mazda 323 was parked outside. He never got to drive it again.

As John Fitzpatrick was away I had the responsibility of dealing with the doctor in the hospital who told me straight that Mick had cancer of the pancreas and he would last about six months. Mick said he wanted to be told the truth about his illness and when I said this to the doctor he said he would answer Mick’s questions honestly. It took Mick quite some time to ask the straight question. However much we might want to know the truth, however much we accept the prospect of death, there is a moment of grace when the question can be asked and the truth told.

On March 17 Mick  finally asked the doctor the straight question and was told the truth. I asked him how he felt now that he knew and he said “I feel indifferent.” He gave the same answer on other occasions.  His main concern was how it would affect his brother Bernard. Pat Dwyer and Tom Hynes were there that day and Tom was left speechless by what he had heard. The speechlessness of the brotherly love that exists in our community.

Mick seemed to resign himself in a positive way and spent his time getting ready to go. He was never one to make a  show of his prayer - he did his best to hide it - but going in to visit him you would often find him with his rosary. There was a picture of Our Lady and the child Jesus on the wall  of his hospital room and one day when John Kelly and I came in he was gazing in childlike wonder at it. He said “take a good look at that child. Did you ever see anything as beautiful as that face?” And after a silence and still gazing he simply said “sweet Jesus”. It was a rare glimpse of the inner reality of his love and devotion. It had to be there because he was so faithful all his life. He was also very real and human. Mick was a wonderful patient and drew the best out of everyone who came in contact with him. For a man who was so private he dealt extremely well with the physical embarrassment of sickness. His gratitude for anything we did for him was boundless as if it was a surprise or that he didn’t deserve it.

I first met Mick in late December 1972 when he was Rector at St. Petroc’s in Stillorgan. It was my first year in the Pallottines and I was repeating two subjects in the Leaving Cert. I went to Dublin to do a crash course in Leeson Street and arrived unexpected on a dark December night at the door of a dark and empty St. Petroc’s. When I failed to get an answer I went across the road to the Oblates who brought me in and kept phoning Petroc’s till they got an answer. I remember sitting happily among the Oblate students chatting and being the centre of their attention for a couple of hours. There was something very innocent and free about that night. Eventually John O’Connor came to get me. I must have been there a couple of weeks alone with Mick. He was kind and fatherly and very tolerant as I watched David Bowie singing “Star man” on the end-of-year Top of the Pops.

Kind and fatherly are words that describe Mick when he became our Rector in Thurles from 1975-1978. I always felt safe in his presence even when he had to tell me hard truths about myself. At 4.00 p.m. in the afternoons when we returned from class in St. Pats he would be sitting in the dining room with his coat thrown over his shoulders, waiting for us to come and have tea and talk to him about the day. At times he threw caution to the wind and brought us in to his room for a game of burn.

I was a troubled and troublesome student in those days and left in 1976 to taste a bit of life in the world. I had an absolute ball most of the time. My work was in St. Anne’s residential home and during my interview for the job Sr. Veronica asked “do you think you’ll go back to the seminary?” “No” I answered truthfully because I had no intention of going back. I saw myself as being unfit for the priesthood. When I was leaving the job in 1977 Sr. Veronica told me about the reference Mick wrote for me the year before which he ended by saying “we expect him to return.” Which I did, of course!

We spent a few years together on the Provincial Council and when I came to live in Dundrum he was the anchor of every evening. Always there. Always looking out for me. When I needed to get away I usually asked him if he’d mind looking after the students he would say “I’d do anything to see you getting a few days off.” His very presence had an amazing effect on the students and vice versa. He came alive with them and got such pleasure out of talking them.

On our way down to Cork on June 11th the students and I called to see Mick in the Ardeen nursing home, Thurles. He had moved there by his own choice, so that he would not be a burden when he died and we wouldn’t have far to bring him to the grave in Cabra. He was so pleased to see each of the lads and his eyes rested on each of them with such a great love. There was a radiance about him that day, such peace in the room and we each had the feeling that we would not see him again. He died two days later, aged 72, at 12.30 p.m. on June 13th.

On Tuesday June 15 Mam, Maura and I went to Mick Timlin’s funeral in Thurles. One of the things Maura loved about Pallottine funerals is the singing of the Salve Regina at the graveside. Little did we realize then that hers would be the next funeral we would attend, a grief that none of us anticipated. May they rest in peace. 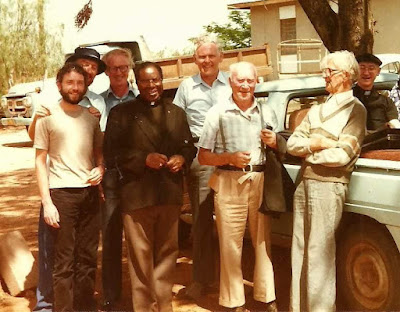