The Space Between: Night of the Blood Wolf Moon 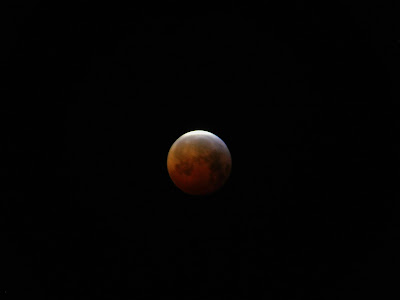 It’s something that won’t happen again for another twenty years – the Super Blood Wolf Moon, a total lunar eclipse. So, I went out shortly before 5.00am to have a look. On this morning with a heavy white frost – minus 6 according to the weather app - the sky was clear and sitting over the rooftops of High Street was the full red moon.  Neither as big nor as bright nor as red as I had thought but still this was it, a rare happening in the January sky.
My attempts to photograph it were not that successful due to my shivering hands and not really knowing how to take photos at night, so I contented myself with walking and watching the wonderful sight. Went up West Hill where three photographers seemed to be getting it right and further from them, almost unseen but for the glow of her cigarette, sat a woman inadequately dressed on a frozen bench. I said good morning and headed down to the sea, then up the East Hill where I found myself standing in the space between the setting moon and the rising sun.
I’m fond of these in-between spaces – the space between sound and silence, sirens and sea, city and coast. It’s like an awareness of all of life, holding contrasts and contradictions in balance - those of many, many people.
It was said to me recently that, as an unmarried priest, I couldn’t have empathy for married people since I know nothing about marriage and family life. How could I advise anyone what they should do? It was said in the friendliest of manners but the comment offended me a bit, just a little because I know I have empathy. And I don’t advise people that much. I listen.
There is something about being a priest, whether single or married, that calls him to stand in the breach of life. It’s a phrase that I read in Ezekiel many years ago and I think it means standing in the space between on behalf of people in a kind of intercessory way. A mediator in Christ who is the Mediator. The space is occupied by Christ. He is the space and sometimes I feel that I am in Him a space between.
In the intercessory role I have taken the way of St. Louis Marie de Montfort who advocates giving everything to Mary, every intercession, allowing her to decide how to present them to God, to Jesus her Son. That space which she occupies is one of the striking and puzzling aspects of the Wedding Feast at Cana. She sees the need and initiates the miracle.
So, all my intercessions are contained in the phrase “Totus tuus” (totally yours) which I think is part of the spirituality of Louis Marie de Montfort. It was also the motto of Pope St. John Paul II and is the title of two lovely and very different hymns – one by the Polish composer Henryk Górecki and the other by Dana Rosemary Scallon from Derry. Each of these hymns regularly rises up in prayer. The Górecki one makes me feel like I’m in silent and tranquil flight through outer space. Totus tuus sum Maria, Mater Christi, Mater mea in sinu Jesu. Ora pro nobis, ora pro eis in sinu Jesu. Adoramus te Domine. I’m not sure how correct my Latin is but that’s how it has formed within me. I am all yours Mary, Mother of Christ, my Mother in the bosom of Jesus. Pray for us, pray for them in the bosom of Jesus. We adore you Lord. 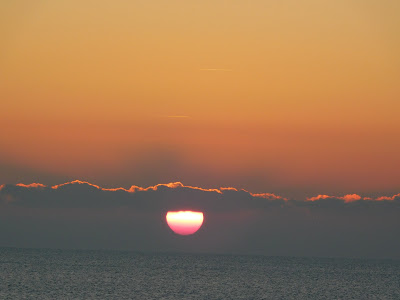 That’s what stirred in me in that lovely place, up there on the Hill looking on the old town below – its lights, the lives sleeping in the houses, slowly waking to another day, another week. The traffic was already on the move and the birds sang tentatively in the cold air.
And I found myself praying Psalm 63, singing it with wide open arms – the John Michael Talbot version – a prayer of desire. Over on the West Hill I had prayed the rosary, remembering how the young St. Francisco of Fatima spoke of the moon as representing Mary while the sun represents Jesus.
The slow unveiling of the moon out of the shadows of eclipse is quite beautiful, its light intensely brilliant.
Back down on the shore at Rockanore I watched the patient process of fishermen launching their boats into the new day, something I hadn’t witnessed before. There was frost on the stones of the beach and my fingers were as cold as they used to be in the winters of my childhood, so cold back then that I sometimes fainted.
At 8.00 the sun rose a magnificent ball of red or more a dark pink and then I wandered back up High Street to home, to breakfast and a snooze. 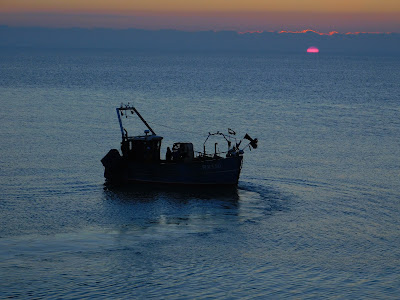