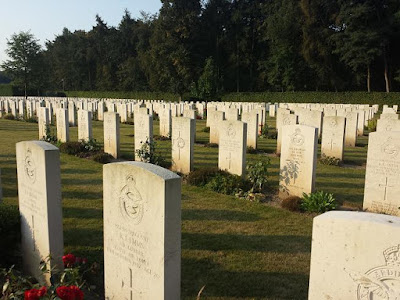 It’s the summer of ’78 when ‘Saturday Night Fever’ is in full flight and I’m a student working in Germany for the holidays.


That same summer I went to visit the Rheinberg War Cemetery, the resting place of more than three thousand victims of World War II. I was struck by the silent stillness, the sheer beauty and peace of it and I pondered the contrasting uproar of ugliness, the unspeakable suffering that gave birth to this place.
War is an awful reality that I cannot understand but I find in myself a great respect for every single person who has served in war in any capacity; the selfless generosity and courage is deserving of my honour and admiration.


And the peaceful silence that rests over such cemeteries seems to me to speak of promise – God’s promise of a lasting peace that is eternal, a peace that only Christ can give, a peace that will perhaps elude us as long as we live on earth, a peace that will find its fulfilment in heaven. Such a promise in no way is a justification for war but God has a war of turning all things to good.


Most of the headstones in Rheinberg bear the name of the one buried but there are 158 that bear no name and at the bottom of the headstone is written “Known Unto God” – this more than anything impresses itself on my heart and mind. 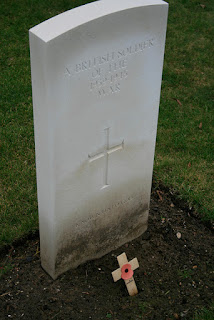 Known unto God is the most important knowing there is but it is part of our human makeup to ignore such knowing because we really want to be known by those around us. To be known and noticed and appreciated. Small things like someone noticing your new hairdo, the meal you cooked, the job you did in the garden and how we suffer when the ordinary things of our lives go unnoticed.


It’s a harsh reality for many people that there is no one there to notice anything about us and God is inviting us to pay attention to the fact that He takes notice of every single aspect of our lives. For sensitive souls, for the scrupulous of a certain generation this conjures up notions of God watching us in a fearsome way, ready to catch us out as soon as we make a mistake.


I’m thinking about God noticing in an admiring, appreciative way. This matters when one is left feeling unimportant, insignificant in life.


When my mother died, I suddenly realized that I was no longer anybody’s son. My father was already 18 years gone and I became nobody’s child in this world. It hit home to me when someone asked, “whose are you now?”


It happens to the widowed or when one’s child has died. It creates an emptiness that cannot be put into words and in some way we became nothing for a while, a long while.


I’m thinking about a book Maura gave me years ago – ‘Even the Least Thing Has Meaning’ – and I’m thinking about a single leaf on top of a tree that I was admiring one day in Tanzania. That leaf is visible to no one except God and the birds and in that lies its meaning – that it is seen by God, known by God, admired by God who created it and that is enough. During that little meditation I was feeling very insignificant and, on the edge, and it was a grace that I could accept that it was enough for me to be seen and known by God. Ultimately, I am a son of God and that’s enough.


It’s what we come across in the gospels – the supreme importance of what is little and seemingly of no account. The child. At our family Mass on Sunday we have aa rather lengthy offertory procession – someone suggested that it takes half an hour which is not true.


Maybe it takes ten minutes but it is important because every single little thing presented there by the child matters to God, every single child matters as do the parents who walk with them. They represent all of us and somehow, they are making all the little offerings on behalf of the whole community. After Mass today a little girl came to me with a fallen, fading leaf which she handed to me saying, “this is for you Father Eamonn!” Even the least thing has meaning! 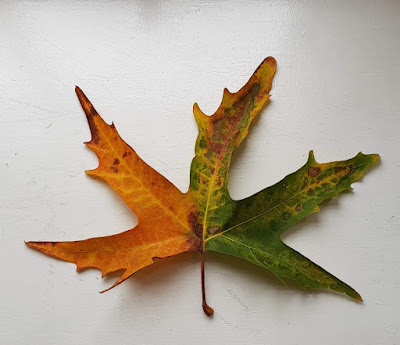 It is one of the lovely things I liked about the offertory in Tanzania. Not just the children but every person in the congregation came forward with an offering – some with money, others with a few onions or eggs or a bag of grain – essential aspects of life, things that matter however small.


There’s an offering taking place in today’s gospel (Mark 12:38-44). People putting money into the treasury, some putting in a lot and maybe feeling important in doing so but the one who catches the attention of Jesus is the poor widow who puts in two small coins. She might have put in the least amount compared to all the others but, for Jesus, she has put in everything she had and so her offering is wholehearted, completely generous.


So, when we find in life that we have little or nothing to give, it’s important to give all the same because it matters in itself and it matters to God with whom what is insufficient becomes sufficient, more than enough.


The widow of the first reading reminds me of a little experience I had at communion time at Mass one time in Worth Abbey. I was given the chalice to share with the people and as soon as I saw it, I said to myself, “this is never enough for all this crowd” and I felt a bit annoyed with the priest who had put the wine in the chalice, that he hadn’t put in more.


And so the people were coming to me one by one and I kept thinking that this will never last, the Precious Blood will run out when the words of the Prophet Elijah came into my mind, words spoken in today’s first reading - “The jar of meal will not be emptied and the jug of oil will not fail” ( 1 Kings 17:10-16)– and so it was with the chalice. When Communion was finished there was actually some left over. More than enough in the end!