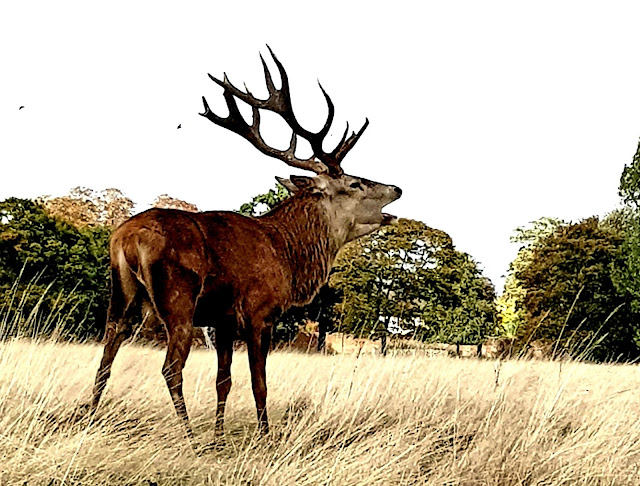 I sit near a solitary stag in the long white grass. We look at each other and, for a while, he seems not to care until he stands up to his full stature sniffing the breeze between us and turning his back to me he bellows into the sky. I dare not put his tolerance of me to the test, so I leave him his space. Alone. Richmond park is dotted with herds of deer of every age and size - the graceful, elegant and cute, each herd having one stag as far as I can work out. All of them are beautiful, captivating and I feel I could just lay down among them finding a belonging there. Not that I could become one of them, I just feel a closeness to them inside me.  You couldn't say that the lone stag is either elegant or graceful but he is beautiful, majestic and I love him more than all the rest. I'm curious about his solitude. Why is he out there on his own? Has he been driven out by a younger, stronger stag? There's no way of knowing but I have an affinity with him. He has become the symbol of my retreat. Joe and I walked here the other evening. We've known each other for 35 years and spent many years together in community but haven't seen each other since before I left Shankill, so there is great delight in our meeting. Ours is a friendship that is easily picked up from where we left off. He's one of those who has seen me close up, warts and all as they say, and with him I feel safe. I can be myself. Now he too is living in England, having taken up his appointment to Greenford parish a few weeks ago. Little did we think two years ago that we would both be in this country, walking in this lovely park. Walking here with Joe or alone and in quiet prayer before Jesus in the Blessed Sacrament – these have been the singular blessings of the retreat. And I have come to a clearer awareness - best expressed in words of Scripture that occurred this week. "This I know, that God is on my side.” (Psalm 56) “He makes me leap like the deer, He guides me to the high places." (Habakkuk 3:19) and "After my awaking, he will set me close to him, and from my flesh I shall look on God. He whom I shall see will take my part: these eyes will gaze on him and find him not aloof." (Job 19:21-27) My "homeland is in heaven and it is from there that we are expecting a Saviour, the Lord Jesus Christ, who will transfigure the wretched body of ours into the mould of his glorious body, through the working of the power which he has, even to bring all things under his mastery." (Ephesians 3:20-21) God is on my side, He sets me close to Him and takes my part, a reminder of what I know but need to learn again in the experience of the thorn in the flesh. Humbling and humiliating is the cross that penetrates my very essence, the cross that will transform and even change my identity just like the identity of Jacob was changed when he wrestled with God through the night. Injured, blessed and changed!

Like Thomas Merton my sleepless bed is my altar of sacrifice but there has come a point where it doesn't matter much whether I sleep or not and there is yet to come the point when suffering and ease will be the same thing; joy and sadness, success and failure. Nothing will matter as long as I have Christ.

"I have learned to manage with whatever I have. I know how to live modestly, and I know how to live luxuriously too: in every way now I have mastered the secret of all conditions: full stomach and empty stomach, plenty and poverty. There is nothing I cannot do in the One who strengthens me."(Philippians 4)
As Pallotti would say - Not suffering but God, not success but God!  God first and last in all things. Alpha and Omega!

I’ve loved being on this retreat and I’ve loved being with the community but it also tested me – the constant chatter and laughter when we were together when I would occasionally have liked other kinds of conversation. But I’m too serious and too solitary. Still I needed to be with them, felt the need to be with them and turned up at every community gathering, except breakfast. After the first day breakfast became a bridge too far so I stayed in my room every other morning, drinking my coffee there – peacefully.
Leaving the retreat was difficult or at least I felt reluctant. A bit like Peter and his companions after the Transfiguration of Jesus, not that this was as dramatic as that but I had settled into its blessedness.
Using his antlers and hoofs the stag carves out a groove in the earth about the length of his own body and into that groove he settles. It’s a kind of resting place, a place of hiding which is aided by the long grass. The retreat was the groove that I had carved out for myself and leaving it didn’t come easy.
The journey home from London didn’t do much to ease the pain. Wrong turns, doubling back, Friday traffic, an accident on the M25, a broken-down van on the A21 all added an extra hour to my return.
But I dropped in to Morrisons supermarket in Hastings to get a few bits and there in the middle of an aisle I bumped into a young Mum from the parish with her two young children who looked a bit mesmerized at the sight of me, so much so that they didn’t utter a word. They just look up at me with their beautiful faces and smiled. I said, “you’ve never seen me dressed like this before!” All they ever see is me in vestments on a Sunday morning. We high-fived and I moved on feeling revived, knowing that I had come home. It takes a child or two to turn the world around!
on October 05, 2018